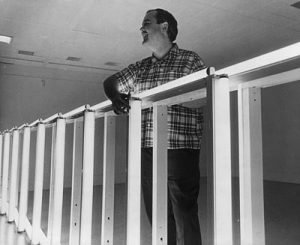 Flavin’s first works were drawings and paintings that reflected the influence of Abstract Expressionism: he had been employed as a guard and elevator operator at the Museum of Modern Art, where he met Sol LeWitt and Robert Ryman. In 1959, he began to make assemblages and mixed media collages that included found objects from the streets.

In the summer of 1961, while working as a guard at the American Museum of Natural History in New York, Flavin started to make sketches for sculptures that incorporated electric lights. Diagonal of Personal Ecstasy (the Diagonal of May 25, 1963), a yellow fluorescent placed on a wall at a 45-degree angle from the floor and completed in 1963, was Flavin's first formal light piece; it is dedicated to Constantin Brâncuşi and marks the beginning of Flavin's exclusive use of commercially available fluorescent light as a medium. He confined himself to a limited palette of red, blue, green, pink, yellow, ultraviolet, and four different whites, creating works which would explore color, light and sculptural space, and which filled gallery interiors. Most of Flavin's works were untitled, followed by a dedication in parenthesis to friends, artists, critics and others: the most famous of these include his "Monuments to V. Tatlin," a homage to the Russian constructivist sculptor Vladimir Tatlin, a series of a total of fifty pieces which he continued to work on between 1964 and 1990.

In the late 1970s, he began a partnership with the Dia Art Foundation that resulted in the making of several permanent site-specific installations and led to the organizsation of the travelling exhibition, Dan Flavin: A Retrospective (2004–2007). This exhibition traveled to the Museum of Contemporary Art, Chicago; the National Gallery of Art, Washington, D.C.; the Museum of Modern Art, Fort Worth, Texas; Hayward Gallery, London; Musée d'Art Moderne de la Ville de Paris, Paris; Bayerische Staatsgemäldesammlungen, Pinakothek der Moderne, Munich; and the Los Angeles County Museum of Art, Los Angeles. 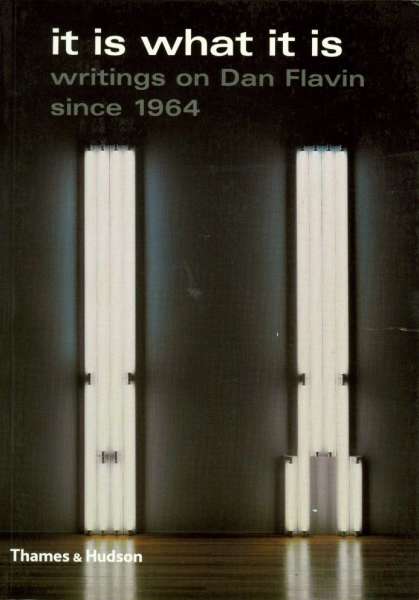 It is what it is - Dan Flavin