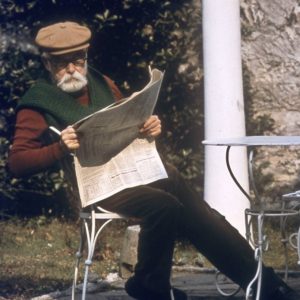 Italian artist Antonio Calderara's subtle, minimal works on canvas and paper belie his time as a student of engineering in Milan during the 1920s. He left his studies to become a self-taught painter, initially working in a realist style, but later took inspiration from Josef Albers and Piet Mondrian. By the mid-1950s, Calderara began to move away from figurative painting to embrace a more geometric approach, radically reducing both the scale and the compositional elements of his paintings through use of simple forms and flat blocks of nebulous and subtle colour. Situated neither within Constructivist nor Minimalist movements, his pared-down vocabulary of lines and squares, refined colour palette and precise measurements nevertheless positioned Calderara closely with other minimalist painters at the time. A meeting in 1960 with Almir da Silva Mavignier, which led to his inclusion in the avant-garde Studio f at Ulm Museum.