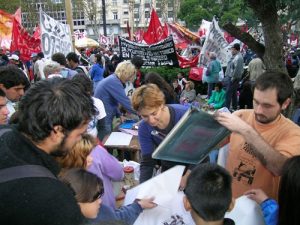 El Taller Popular de Serigrafía (The People's Screen‐Printing Workshop) is a group of revolutionary printmakers that was active between 2002 and 2007 in Buenos Aires, Argentina. Founded by Diego Posadas, Mariela Scafati and Magdalena Jitrik, El T.P.S. was one of the most significant groups in socio-political art, forming after a period of great national unrest in Argentina. Using silk-screen printing to react quickly to current political events, the group’s participants turned their works into an instrument of social struggle. Whilst taking part in demonstrations they often drew images on the clothes of the ralliers, and in particular created posters and leaflets which are now collected and exhibited in mainstream institutions.

During the years 2002-2007, the members of El Taller Popular de Serigrafía changed, and it included at least 15 artists during its existence. Its main representatives in the period 2006-2007 were Verónica di Toro, Karina Granieri, Magdalena Jitrik and Carolina Katz.

In 2006 El T.P.S. participated, with several other Latin American artists, in the Zoo Portfolio Latin American edition, a portfolio of works curated by Adriano Pedrosa, published by Archeus and sold to raise funds for the Zoo Art Fair for emerging artists.