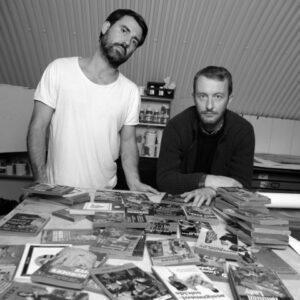 Twins Franklyn and Brendan Connor were brought up within a secretive American cult known as ‘The Family’. Founded by David Berg in 1968 ‘The Family’ was an extreme Christian cult whose hippy members believed in something called ‘The System’. Other children brought up within the cult included the actors River and Joaquin Phoenix.

As children the twins were deprived of access to information from outside their commune. Without access to mainstream media, their knowledge of the world was limited to the teachings and interactions they gained from other cult members. At sixteen the boys turned their backs on The Family and ran away from the commune, eventually settling in the Brooklyn area of New York.

Having been starved of information for so many years Franklyn and Brendan were initially overwhelmed by the outside world but soon developed an insatiable curiosity and a remarkable appetite to learn. They developed a system whereby each of them would read, watch and discover things independently and then share them with one another via a series of notebooks and sketchpads. This interaction developed into making art together, a process they describe as ‘trying to make sense of the world.’ Their often humorous work is steeped in references to both historical and popular culture and presents an almost anthropological view of contemporary western society.

Now in their early twenties the twins split their time between New York and Missouri.

Franklyn and Brendan Connor are, however, fictional characters and The Connor Brothers is the pseudonym for British artists James Golding and Mike Snelle. The duo came to prominence in 2012 and for several years maintained their anonymity by using a fictional biography. Their identities were revealed in 2014 in a major feature by Mick Brown in The Telegraph magazine, allowing them to undertake more ambitious projects.

Best known for their Pulp Fiction series, the pair are also known for their activist work and their playful hoaxes. In 2014 they created a fictional museum -The Hanbury Collection, which fused truth and fiction in such a way as to render it impossible to work out which exhibits were real and which were not. This obsession with truth and fiction can be seen throughout their work, and is particularly relevant in the current climate of fake news, post-truth, and social media obsession.

The Connor Brothers have been amongst the most prominent artistic voices to comment on the refugee crisis. The duo worked for several years in The Jungle refugee camp in Calais building shelters and undertook an international billboard campaign highlighting the plight of displaced people - Refuchic. Closely associated with the Russian activist group Pussy Riot, The Connor Brothers produced their 2015 refugee themed theatrical performance at Banksy’s Dismaland. More recently they have teamed up with Professor Green and the mental health charity CALM to raise funds and awareness about the UK’s epidemic of male depression and suicide.

The Connor Brothers have exhibited internationally from New York, Sydney and Dubai to London, Hong Kong and Berlin. Their work frequently appears at major auction houses where a record price was achieved in 2016. Works can also be found in major public and private collections including The Victoria and Albert Museum, The Penguin Collection and both the Omer Koç and Niarchos Collections.

Available works by The Connor Brothers 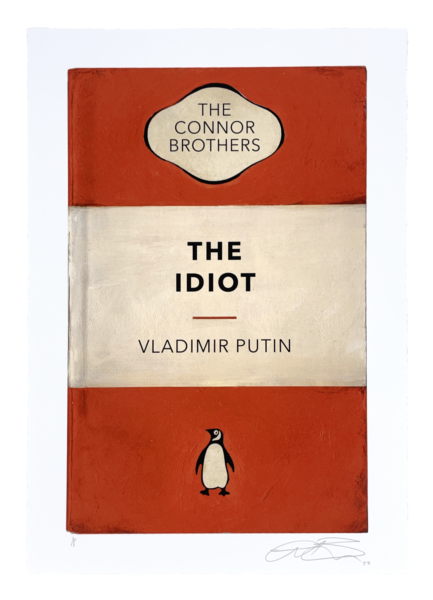 The Idiot - The Connor Brothers