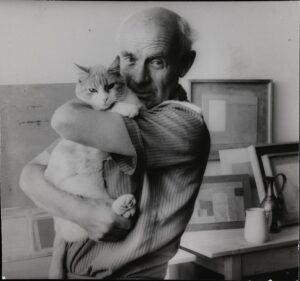 Ben Nicholson was born into and perpetuated a firmly established artistic family. His father was Sir William Nicholson, a noted English Impressionist, his mother was also a painter and the sister of the acclaimed painter James Pryde. His first wife was the painter Winifred Nicholson, whilst his second wife was the sculptor Barbara Hepworth.

Nicholson enrolled at the Slade School of Fine Art in London in 1911. He remained there for just one term, touring pre-war Europe and spending much of WWI in America. Returning to England he struggled to find his identity as an artist, at first joining the Axis group and then the influential 7&5 Society in 1924, becoming its chairman soon after. By 1933 he was a joint founder of Unit One alongside Paul Nash and very much made up for his sluggish start and gaining great authority with his explorations in abstraction.

He began a relationship with Barbara Hepworth, with her in France he met Jean Arp and Sophie Taüber-Arp, joining the Abstraction-Création group at the invitation of Jean Hélion. Even in London his neighbour was Mondrian, who was briefly residing in London in the late 1930s. In 1940, with Hepworth now his wife, he moved to St Ives in Cornwall. Many artists came to join them there, particularly after the war, forming a group around him. He was awarded numerous prizes and distinctions - in 1952 he won the Carnegie Prize at the International Exhibition in Pittsburgh; in 1956 he won the First Guggenheim International Prize; in 1957 he won the International Painting Prize at the São Paulo Biennale; and in 1958 he won a major prize at the Venice Biennale.

Ben Nicholson is seen as the principal representative of Abstraction in English art between the wars. In 1937, along with the architect J.L. Martin and Naum Gabo, he published the review Circle - International Survey of Constructive Art. In an international context his work draws upon and contributes to the legacy of European Cubism and Neo-Plasticism. His work retains a quintessentially British classicism, with a tendency towards the sparse and ethereal. Using a restrained vocabulary of household items pared down to their bare essence, to a point at which they constitute abstract circles and squares, Nicholson championed a barely coloured delicate palette, often with the transparency of watercolour. The extreme refinement and restraint of his work constitutes his unique contribution to modern British, and international, art.