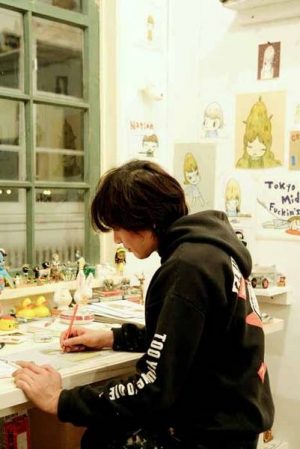 Yoshitomo Nara is a Japanese artist who lives and works in Tokyo. He produces paintings, drawings and sculpture which are cartoon-like in appearance, but contain a deep and often disquieting beauty. His work first came to attention in Japan in the 1990s and was almost immediately noticed by several international curators and critics who were also intrigued by the work of his colleague Takashi Murakami. Whereas Murakami's works are wantonly hard-edged and super-flat though, Nara's are painterly and poignant.

The large-eyed children who often appear in Nara's pictures may at first appear to be cute or vulnerable are however, upon closer inspection, subverted in some way. Some have their hands behind their backs and stare defiantly, some openly brandish weapons, some swear. Nara explains that his children, though, are 'among other, bigger, bad people all around them, who are holding bigger knives'.

Manga and animé are both obvious influences on Nara's work, however so is punk rock. By juxtaposing the innocent child with a suggestion of evil intent, and referencing anarchic music, Nara reacts to Japan's rigid social conventions.

In 2010, Nara had a major exhibition 'Nobody's Fool' at the Asia Society in New York.