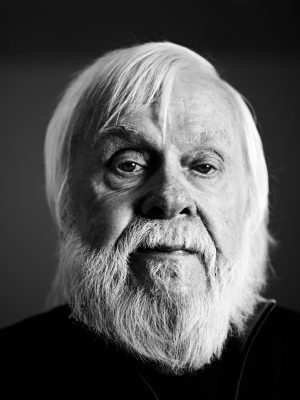 John Baldessari (1931-2020) was an American conceptual artist known for his work featuring found photography and appropriated images. He lived and worked in Santa Monica and Venice, California.

Initially a painter, Baldessari began to incorporate texts and photography into his canvases in the mid-1960s. In 1970 he began working in printmaking, film, video, installation, sculpture and photography. He created works which demonstrate, or combine, the narrative potential of images and the associative power of language within the boundaries of the work of art. His work influenced that of Cindy Sherman, David Salle, Annette Lemieux, and Barbara Kruger.

By 1966, and a teacher at CalArts, Baldessari was using photographs and text, or simply text, on canvas. His early major works were canvas paintings that were empty but for painted statements derived from contemporary art theory. In 1970, Baldessari and five friends burnt all of the paintings he had created between 1953 and 1966 as part of a new piece, titled The Cremation Project. The ashes from these paintings were baked into cookies and placed into an urn, and the resulting art installation consists of a bronze commemorative plaque with the destroyed paintings' birth and death dates, as well as the recipe for making the cookies. Through the ritual of cremation Baldessari draws a connection between artistic practice and the human life cycle.

Baldessari is best known for works that blend photographic materials (such as film stills), take them out of their original context and rearrange their form, often including the addition of words or sentences. Related to his early text paintings were his Wrong series (1966–1968), which paired photographic images with lines of text from an amateur photography book, aiming at the violation of a set of basic "rules" on snapshot composition. In one of the works, Baldessari had himself photographed in front of a palm precisely so that it would appear that the tree were growing out of his head.

Baldessari has expressed that his interest in language comes from its similarities in structure to games, as both operate by an arbitrary and mandatory system of rules. In this spirit, many of his works are sequences showing attempts at accomplishing an arbitrary goal, such as Throwing Three Balls in the Air to Get a Straight Line (1973), in which the artist attempted to do just that, photographing the results, and eventually selecting the "best out of 36 tries", with 36 being the determining number just because that is the standard number of shots on a roll of 35mm film. The writer eldritch Priest ties John Baldessari's piece Throwing four balls in the air to get a square (best of 36 tries) as an early example of post-conceptual art. This work was published in 1973 by a young Italian publisher: Giampaolo Prearo that was one of the first to believe and invest in the work of Baldessari. He printed two series one in 2000 copies and a second in 500 copies. Following Baldessari's seminal statement "I will not make any more boring Art", he conceived the work The Artist Hitting Various Objects with a Golf Club (1972–73), composed of 30 photographs of the artist swinging and hitting with a golf club objects excavated from a dump, as a parody of cataloging rather than a thorough straight classification.

Baldessari has been in over 200 solo shows and 1,000 group shows in his six-decade career. His works are part of major public and private collections, including the Museum of Modern Art, the Guggenheim Museum, the Los Angeles County Museum of Art, the Hirshhorn Museum and Sculpture Garden and the Broad Collection. 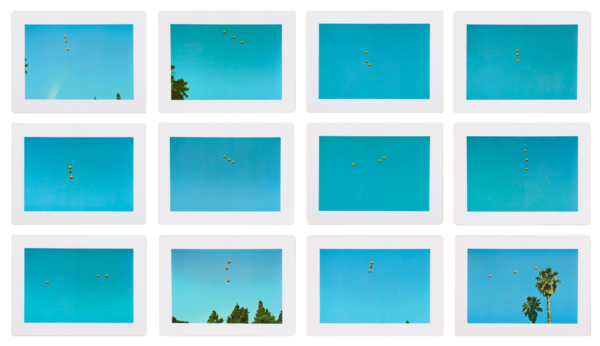