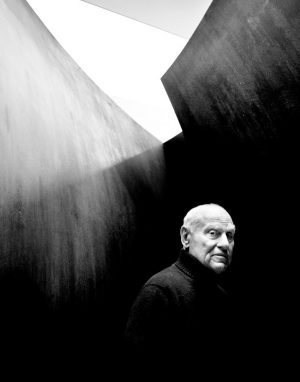 Born in San Francisco in 1938, Richard Serra was the son of a shipyard worker, who went on to create abstract sculptures and works on paper celebrating immense form, weight and balance. He has written about the formative experience of watching the launching of the huge steel tankers, in which balance and buoyancy were dramatically tested.

Serra studied at the University of California, Berkeley, and then at Yale, moving to New York in 1966. It was there that he began making art from industrial materials, especially metal. The artist quickly rose to prominence in a climate where artists were reexamining Minimalism's static formal qualities in favour of a more analytical approach to process and materials. Serra's work took abstract and invisible properties such as weight, balance, pressure, and gravity, all of which are traditionally associated with sculpture and applied them on an immense scale.

Serra's later sculptures focused on elliptical forms whose steel surface is intended to change color and texture when exposed to the weather. His drawings in oilstick exhibit similar concerns to his sculptures and convey a feeling of great substance and forceful movement.

His works are included in the collections of every major museum worldwide.