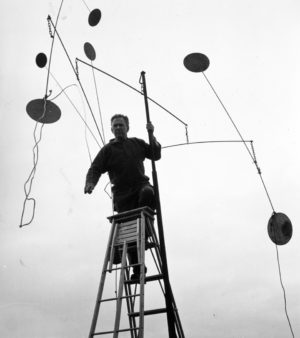 Alexander Calder (1898 –1976) was an American sculptor known for his kinetic mobile sculptures.

A third-generation sculptor, and with a mother who was a painter, Calder began making sculptures at the age of 4. Whilst still a child he used scraps of copper wire that he found in the street to make jewellery for his sister's dolls. His parents, however, did not want him to be an artist, so he decided instead to study mechanical engineering. It was not until after his degree in 1922 that, during a stay with his sister in Washington state and inspired by the mountain scenery, he wrote home to request paints and brushes. Shortly afterward, Calder decided to move back to New York to pursue a career as an artist.

Calder moved to Paris in 1926 and met and became friends with a number of avant-garde artists, including Fernand Léger and Marcel Duchamp. Whilst there Calder initially made figurative wire sculptures, but it was a visit to Piet Mondrian's studio in 1930 which persuaded him to embrace abstract art, a direction toward which he had already been tending.

In 1931, Calder's first abstract sculptures, of moving elements powered by motors, were christened "mobiles" by Marcel Duchamp, a French pun meaning both "motion" and "motive".

He quickly became disillusioned with the monotonous repetitive movements of his mobiles, seeking a solution whereby the movements could not be predicted. Within a year Calder created his first hanging sculptures that derived their motion from touch or air currents. At the same time, he also experimented with self-supporting, static, abstract sculptures, dubbed "stabiles" by Jean Arp in 1932 to differentiate them from mobiles.

International recognition came quickly for Calder - in New York, he was championed from the early 1930s by the Museum of Modern Art, and was one of three Americans to be included in Alfred H. Barr Jr.'s 1936 exhibition Cubism and Abstract Art. In 1943, when the Museum of Modern Art hosted a Calder retrospective, curated by James Johnson Sweeney and Marcel Duchamp, the show had to be extended due to the number of visitors. In 1946, for an exhibition at the Galerie Louis Carré in Paris, the catalogue essay was written by no less a figure than French philosopher Jean-Paul Sartre.

Calder made scaled-up monumental works for public spaces, made paintings and prints constantly, but also continued to make jewellery, creating over 2,000 pieces over the course of his career, many of them as gifts for friends and relatives.

The artist died unexpectedly in 1976, shortly after the opening of a major retrospective show at the Whitney Museum in New York. 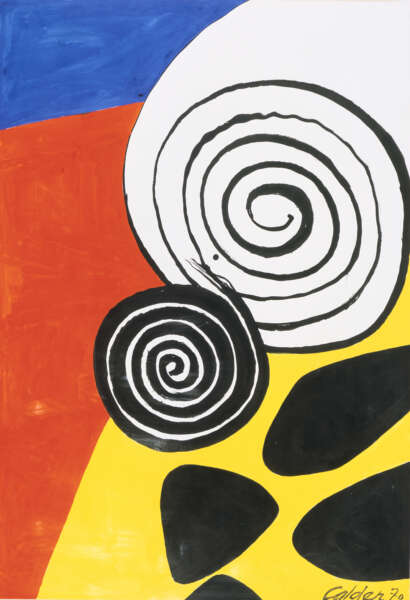 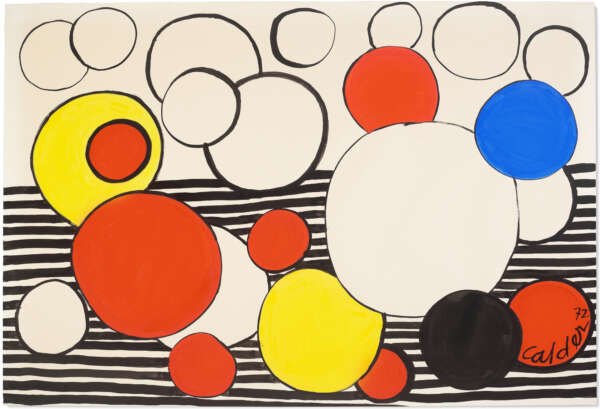