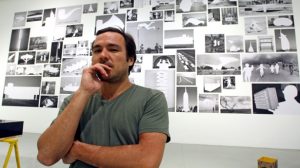 Jose Dávila is a Mexican conceptual artist, living and working in Guadalajara, Mexico.

Dávila's work often employs strategies of replication, distorting the intrinsic meaning of ordinary material objects and dismantling expected relationships between form and content. He observes and upsets traditional readings of architecture, spaces and building materials. Often using photography, Dávila records a scene and others as close to it as he can find, either establishing an existing relationship or proposing one where none might otherwise exist. There is humour and charm in this approach, balancing an undercurrent of knowing social commentary and critical reflection.

In 2006 he participated, with several other Latin American artists, in the Zoo Portfolio Latin American edition, a portfolio of works curated by Adriano Pedrosa, published by Archeus and sold to raise funds for the Zoo Art Fair for emerging artists.