Hans Hartung was born on September 21, 1904, in Leipzig, Germany. He cultivated interests in philosophy, astronomy, music, and religion at a young age before he turned to painting. Early in his career he found inspiration in the works of Rembrandt van Rijn and Francisco de Goya, and later influences included Lovis Corinth, Oskar Kokoschka , Emil Nolde, and Max Slevogt. At just 17, Hartung began to experiment with abstraction, synthesizing the graphic techniques of his artistic models while completely eliminating figurative elements.

Hartung entered the Universität Leipzig in 1924 to study philosophy and art history but left to concentrate on painting at the Kunstakademie, Leipzig. While Hartung was advised to pursue further training at the Bauhaus, he opted to study at the Kunstakademie, Dresden. In 1926 Hartung saw an exhibition of international art in Dresden, which exposed him to Cubism and other modern styles that had emerged in France. His encounters with works by Georges Braque, Juan Gris, Henri Matisse, and Pablo Picasso, along with various travels abroad, encouraged him to move to Paris in 1926, where he spent the majority of his time until 1932, although he passed the summer of 1928 in Munich studying under artist and theorist Max Dörner.

In 1929 Hartung married the Norwegian painter Anna-Eva Bergman. After several years abroad, they tried to reestablish themselves in Berlin in 1935 but were soon forced into exile by the National Socialist regime. In the years leading up to World War II, Hartung's work reflected his attempts to reconcile chance and control, combining expressive graphic elements with patches of black and color to produce a sense of spontaneity. After the outbreak of the war, Hartung served in the Foreign Legion (1939–40), and later in the Free French (1943–44). He was gravely wounded at the German Front, and one of his legs was amputated. In 1945 he returned to Paris and resumed painting and the following year earned French citizenship.

Hartung was a major figure in Art Informel and Tachisme (from the French tache, meaning blot or stain). While Hartung's postwar paintings are generally described as exhibiting a calligraphic quality, his work moved through a series of phases, becoming less spontaneous and more formally aggressive than his work from the late 1930s. In many works of the late 1940s and early 1950s, such as T-50 Painting 8 (T-50 peinture 8, 1950), he applied large areas of color to the canvas on which he painted a combination of bold black brushstrokes and thinner frenetic linear strokes.

Hartung received several international awards, including the 1956 award for the Europe-Africa section at the Guggenheim International Award and the International Grand Prize for painting at the 1960 Venice Biennale. His first major group show was organized by curator and critic Christian Zervos at the Jeu de Paume, Paris (1937). After settling permanently in Paris, he exhibited regularly at the Salon des Surindépendants (1935, 1937, 1945). His first solo show took place at Galerie Lydia Conti (1947) and was followed by other early exhibitions at Galerie de France (1956) and Galerie Craven (1956). Major international presentations include Younger European Painters: A Selection, Guggenheim Museum (1953–54); a retrospective at Musée national d'art moderne, Paris (1969); and solo exhibitions at Metropolitan Museum of Art, New York (1975) and Musée d'art moderne de la Ville de Paris (1980). Hartung died on December 7, 1989, in Antibes, France. 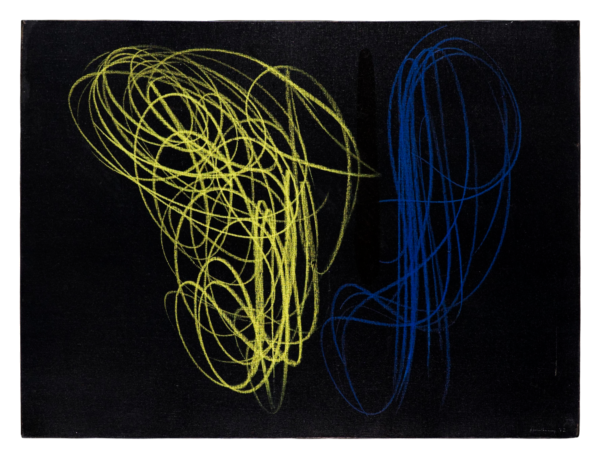 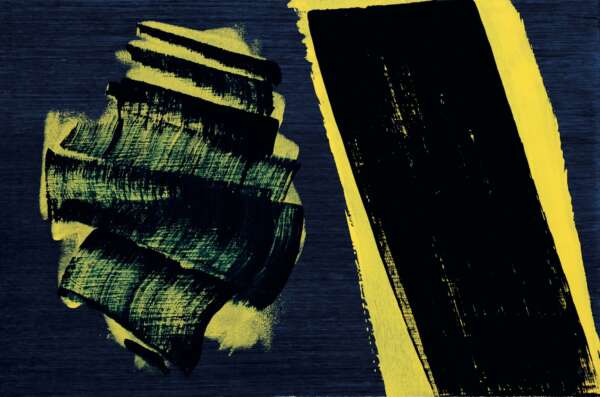