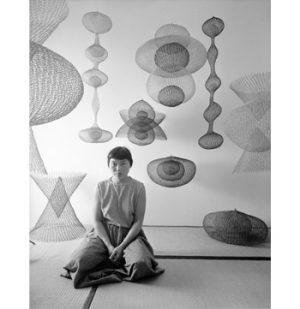 Ruth Aiko Asawa was an American sculptor of Japanese descent, famous for her intricately woven wire sculptures which are in many famous collections of post-war art, including the Guggenheim and the Whitney in New York.

Forced to study at a high school in an internment centre, due to her father’s internment for being a Japanese man in America after Pearl Harbor, Asawa graduated with hopes of becoming an art teacher. Anti-Japanese sentiment remained high after the war however, and she was unable to obtain the work experience necessary for her to gain her degree. So, in 1946, she went for further study at Black Mountain College in North Carolina where she would meet Josef Albers.

Albers was amongst an awe-inspiring cast of teachers at Black Mountain College in the 1940s and 50s, which included John Cage, Merce Cunningham, Willem de Kooning, Franz Kline and Robert Motherwell. Her fellow alumni, in the short 24 years of the college’s existence, included John Chamberlain, Kenneth Noland, Robert Rauschenberg and Cy Twombly.

Asawa learned to use everyday materials from Albers, and she began to experiment with the creation of abstract objects from wire. Whilst travelling to Toluca, Mexico, she observed a basket-making technique from villagers there who worked with galvanized wire. She refined this complex form of crocheting and created modernist objects of languid, persuasive beauty from lines of copper wire which were recognized as highly important by the Whitney Museum of American Art, and shown several times in their annual exhibitions, as well as being shown to great acclaim in the 1955 São Paulo Biennial.

Her work, she held, was infused with memory. One, of sunlight through the translucent wing of a dragonfly, was the inspiration for an early crocheted wire sculpture. In 1958, The New York Times wrote of their “gossamer lightness” and the way “the circular and oval shapes seem like magic lanterns, one within the other.”