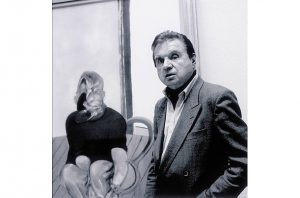 Francis Bacon’s early life was unsettled and spent between England and Ireland: as a child he only received two years of formal schooling. On a small allowance from his mother, he took himself to London, and then to Berlin where he became engrossed in the art scene of the city which was thriving and uninhibited. Moving on to Paris in 1926 at the age of 17, Bacon resolved to become an artist after seeing an exhibition of Picasso drawings at Galerie Paul Rosenbert.
He first trained as an interior designer and furniture designer, but in 1933 Bacon exhibited a Crucifixion painting as part of a group show at the Mayor Gallery. The work was reproduced in Herbert Read’s book Art Now and purchased by the collector Sir Michael Sadler. This early promise faltered however, and his first one-man show in 1934 was badly criticised and did not sell well. Bacon destroyed many works from this period. It was only upon exhibition of Three Studies for Figures at the Base of a Crucifixion at LeFevre Gallery in 1943 that he would be able to restore his reputation as an artist. The work was purchased by Eric Hall who gifted the painting to the Tate Gallery.

Bacon was soon represented by the influential Hanover Gallery in London, but it was only after over three years that the gallery were able persuade Bacon to have a show. Bacon spent much of these three years in Monte Carlo gambling, successfully, with the proceeds of sale of Three Studies for Figures at the Base of a Crucifixion and his 1946 masterpiece Painting. Returning to London in 1949 only shortly before the Hanover Gallery show was due to begin, Bacon hurriedly built up an exhibitable body of work, painted on unprimed canvas. Head VI was the stand-out painting in the show, drawing on Velazquez’s Portrait of Pope Innocent X for inspiration, and beginning a life-long examination of Velasquez’s work.

Throughout the 1950s he became well-known internationally, and was invited to exhibit in the British Pavilion at the Venice Biennale. He had his first solo shows in New York and Paris, and his artistic style developed, influenced by other London painters such as Frank Auerbach and Leon Kossoff, and showed a coarser handling of paint and thick impasto.

1962 saw Bacon given a major retrospective at the Tate Gallery, a show which included Three Studies for a Crucifixion - his first large scale triptych. He exhibited in America, with Marlborough Gallery in New York, to mixed reviews which nevertheless failed to stop the exhibition selling out completely. His complicated love-life always brought drama to his work and to his life, his lover Peter Lacy dying on the eve of Bacon’s Tate retrospective and, several years later in 1971, George Dyer being found dead two days before another retrospective opened at the Grand Palais in Paris.

Bacon remained in Paris, and began to explore landscape in his work. A major exhibition at The Metropolitan Museum of Art, New York in 1975 cemented his reputation as one of the world’s greatest painters, and a great many international institutions now hold his work.

His studio, where he worked for over thirty years, was donated to the Hugh Lane Municipal Gallery of Modern Art, Dublin, in 1998. It was reconstructed and opened to the public in 2001.