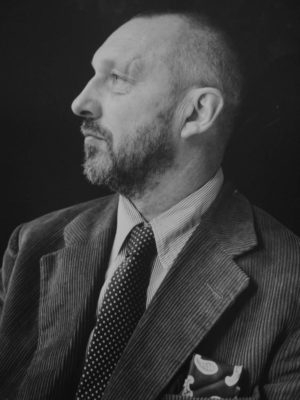 Hans-Georg Kern took the name Georg Baselitz in the late 1950s, DeutschBaselitz being his birthplace. Even by this early stage, and only in his very early twenties, he had already gained a reputation as an enfant terrible, having been expelled from East Berlin’s Hochschule für Bildende und Angewandte Kunst. Finding a second chance at the Hochschule der Bildenden Künste in West Berlin, Baselitz began his search for a new way of painting, something that was the opposite of Socialist Realism and Art Informel. He developed an interest in Anamorphosis, the creation of a perspective requiring the viewer to occupy a specific vantage point to make sense of the image. He also became interested in the art of the mentally ill.

In 1963, Baselitz’s first solo exhibition caused a public scandal and several of his paintings were confiscated for public indecency. He began to work in woodcut, and shortly afterwards made the artistic leap for which he is best known – painting his subjects upside-down in an attempt to overcome or deconstruct representation.

Baselitz represented Germany at the Venice Biennale in 1980. He is now considered one of Germany’s greatest living artists and his work is held in every notable public collection around the world.