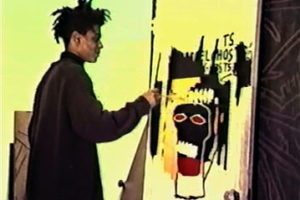 Born in 1960 in Brooklyn, Jean-Michel Basquiat was a pioneer of graffiti art and was at the centre of New York's Downtown scene. He became world renowned and is credited with revitalising the career of Andy Warhol, earning the patronage of the rich and famous in New York society. His early death, at the age of 27, rendered his work iconic.

At the age of 16, having dropped out of school despite a prodigious intellect, Basquiat and a friend began a graffiti campaign in Lower Manhattan, working under the group pseudonym SAMO (“same old shit”). Spraying witty epithets, SAMOs work became notorious, and was the subject of an article in the Village Voice in 1978. After being introduced to, and impressing, Warhol in 1980, the two artists collaborated. Within a short space of time, Basquiat was represented by Annina Nosei, having his first solo exhibition in 1981. Soon, he would also work with dealers Larry Gagosian, Bruno Bischofberger, Tony Shafrazi and Mary Boone; musicians Blondie and David Bowie; and the artist Robert Rauschenberg, as well as having a relationship with Madonna.

Basquiat’s work was often concerned with black culture, as well as commentary and observations on his own ambitions to create a place for himself in the predominantly white world of art and society. Text inevitably played a constant role in his work, and his paintings are typically scrawled with words, statements, lists and symbols. Child-like in execution, the surfaces of his works are dense, multi-layered and chaotic, often incorporating collage.

In 2013, Christie’s sold his 1982 work ‘Dustheads’ for $48,843,750, and he is generally accepted to have been one of the most important artists working in America in the 1980s, not merely influencing the path of fine art, but laying the foundations for an entirely new hierarchy in art, music and contemporary culture. 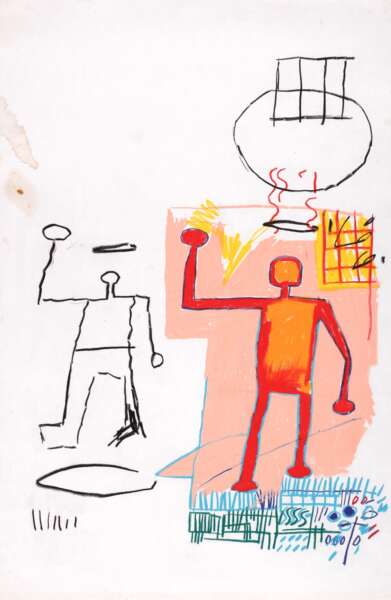