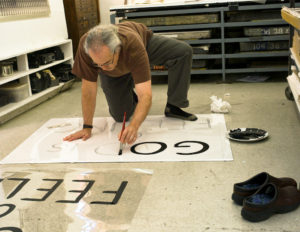 Jonathan Borofsky an American artist who lives and works in Maine. He studied at Carnegie Mellon University, France's Ecole de Fontainebleau and then Yale University.

In the 1960s, Borofsky's art sought to interconnect minimalism and pop art, and he is seen as a unique and significant presence in American art of the period.