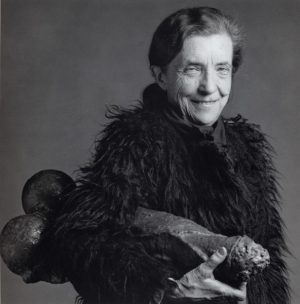 In a career spanning seventy years, Louise Bourgeois produced an intensely personal body of work that is as complex as it is diverse. Overlooked for many years, and unforgivably absent from the 1993 Royal Academy survey American Art in the 20th Century, she is now considered to have been one of the most influential artists of that period.

Her parents owned a gallery in France that dealt primarily in antique tapestries, and they opened a workshop for tapestry restoration below their apartment in Choisy-le-Roi, where the very young Bourgeois was set to work . Her interest in, and use of, embroidery would continue throughout her career.

In 1930, Bourgeois entered the Sorbonne to study mathematics and geometry, subjects that she valued for their stability, saying "I got peace of mind, only through the study of rules nobody could change."

Her mother died in 1932, when Bourgeois was still only 21, and the event would cause her to abandon mathematics and to begin studying art. She joined classes where translators were needed for English-speaking students, so she would not be charged tuition. In one such class Fernand Léger saw her work and told her she was a sculptor, not a painter.

She moved to New York in 1938 upon her marriage to the American art historian, Robert Goldwater. Although she continued her artistic practice in America, her career evolved slowly. The Museum of Modern Art’s retrospective of her work in 1982, when she was seventy, marked a turning point. In an interview that coincided with the opening, Bourgeois explained that the imagery in her work, which deals with themes such as jealousy, violence, sexual desire, betrayal, fear, anxiety and loneliness, was wholly autobiographical and a form of catharsis. In 2000, she made the first of what would become an iconic series of giant spiders entitled Maman, probably her best known work.

“The Spider is an ode to my mother. She was my best friend. Like a spider, my mother was a weaver. My family was in the business of tapestry restoration, and my mother was in charge of the workshop. Like spiders, my mother was very clever. Spiders are friendly presences that eat mosquitoes. We know that mosquitoes spread diseases and are therefore unwanted. So, spiders are helpful and protective, just like my mother.”

Louise Bourgeois continued to work obsessively up until her death in 2010, aged ninety-eight.

Her work is widely exhibited on the international stage and continues to inspire a rich body of academic and critical commentary. The Museum of Modern Art in New York has established an online digital catalogue raisonné of the 35,000 prints and illustrated books that she produced during her lifetime.