John Boyd is an English artist, chiefly known for his deftly painted surreal works. Born in Carlisle in 1957, he studied at the famous Slade School in London, and at University of Newcastle.

His first group show inclusion came in 1978 at Newcastle's C.A.T. Gallery, and he showed with Christopher Hull in London from 1988. Christopher Hull was responsible for curating much of David Attenbourough's collection, and was roundly agreed to have one of the finest eyes in England. Hull was a friend of John Craxton, and a collector of great distinction. Boyd had solo exhibitions at the influential Open Eye Gallery in Edinburgh in 1990 and 1992, and his first American show was at Lydon Fine Art, Chicago in 1999. His sell-out exhibition 'The Rites of Man' at Archeus Fine Art in London in 2000, was the first of three exhibitions there that were equally well received.

The artist now lives and works in Ireland, and his paintings are included in the collections of Allied Irish Bank, and the Merrion Hotel, amongst others.

John Boyd’s artist’s statement: ‘Artists should keep their eyes open and their mouths shut,’ shows that he is an enigmatic character who prefers that his paintings speak for him.

Paintings within paintings, words within words, rearrangement of patterns of words and of images and partial images: this is the landscape which Boyd inhabits. His titles are highly original, complex ways into his paintings. He is drawn to foreign titles, particularly in Latin and French. He likes titles that tease, for example, those with ‘Maybe’ tacked on, deliberately withholding while inviting interpretation. Both titles and paintings are highly original. He likes to invite analysis and also to outwit. A playful artist, Boyd enjoys using Victorian pictorial puzzles, words and word games within his titles and paintings. He enjoys playing with hidden faces and meanings, and the viewer’s understanding and misunderstandings of the messages which he sends out. These are paintings about art and about the puzzles experienced by the viewer in trying to understand the messages the artist may or may not be transmitting, and the frustrations and appeal to the artist of being interpreted and ‘understood’ - catalogue entry. 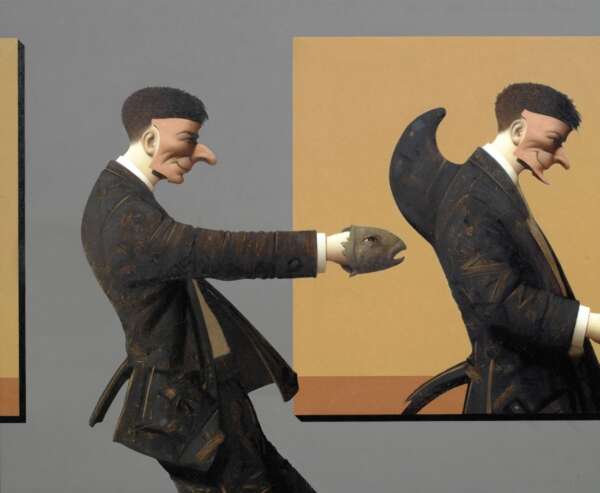 Between the Idea and Reality - John Boyd 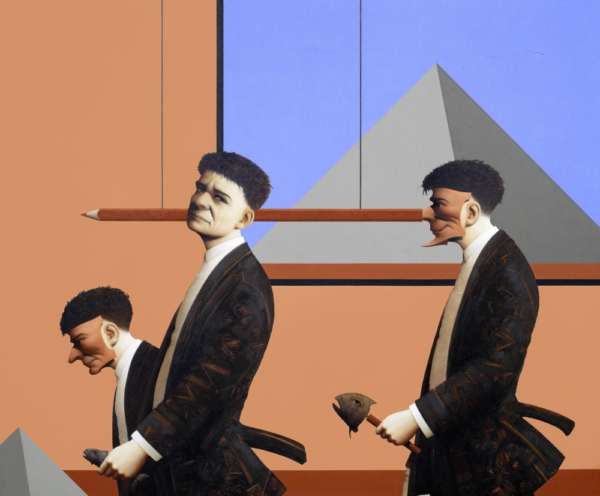