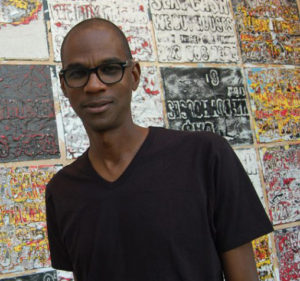 Bradford’s art is concerned with cities, racial identity, history and injustice. It is mainly created from everyday or discarded materials, from torn-down sheets of billstuck posters and the loose flyers of run-down urban neighborhoods. The artist is well-known for his practice of interacting with the materials he employs: tearing; sanding; rubbing down surfaces to visit a patina of wear upon them, part-metaphor for decay, part-pure abstraction and revelry in the surface of those materials.

“Think about all the white noise out there in the streets: all the beepers and blaring culture—cell phones, amps, chromed-out wheels, and synthesizers. I pick up a lot of that energy in my work, from the posters, which act as memory of things pasted and things past. You can peel away the layers of papers and it’s like reading the streets through signs.”

A cerebral man from South Central in Los Angeles, Bradford is now in his mid-50s. He did not formally study art until he was in his 30s, his degree from California Institute of the Arts taking him away from the hairdressing salon owned by his mother where he had worked, and which later became his studio. Bradford no doubt studied, and seems to have taken to heart, the teachings of black philosopher Alain Locke, the key figure of the Harlem Renaissance in the 1920s. Locke told black artists to advance themselves, and moreover to achieve that by adopting modernist forms which would integrate their art with that of their white rivals. At a time when one wonders whether much progress has been made at all over the matter of race in America, Bradford has serenely risen to the highest levels of his practice, and has done so not by trying to blend in, but by creating an individual abstraction from the materials of black culture.
Political references in Bradford’s art are overt, the viewer clued in by the title: “Scorched Earth” of 2006, ostensibly a response to the American war in Iraq, but recalling the burning of a black neighborhood in Tulsa in 1921 by a mob of white men. “Corner of Desire and Piety” is a location in New Orleans which can’t exist as the streets of Desire and Piety run parallel to each other, this impossibility being a comparison to the unsustainable situation many black families found themselves in following Hurricane Katrina and the terrible subsequent lack of government aid.

Bradford’s art can be observed on many levels: the works can be enjoyed purely as abstract creations, the political pointers simply ignored. When the artist termed himself “post-black”, this is one of the facets of what was meant by that. 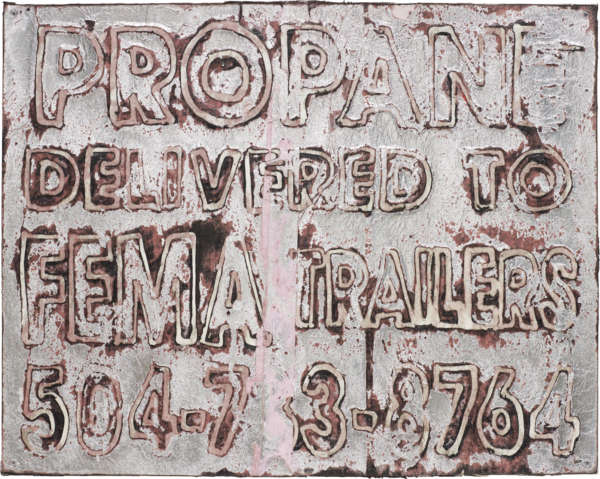