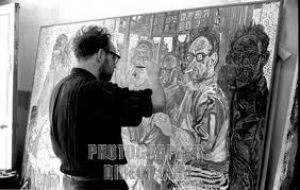 John Randall Bratby was an English painter who founded the kitchen sink realism style of art that was influential in the late 1950s. Born in Wimbledon, Bratby studied at Kingston College from 1948 to 1950, then at the Royal College of Art from 1951 to 1954. Three years after his graduation he became a tutor at the college. Bratby became famous for his adaptation of the impressionist realism of Walter Sickert and the Camden Town Group towards a more aggressively expressionist style influenced by van Gogh and the Abstract Expressionists.

Bratby's expressionistic style became known as "kitchen sink realism" after a painting of Bratby's which depicted a kitchen sink. David Sylvester wrote an article in 1954 about trends in recent British art, calling his article "The Kitchen Sink" in reference to Bratby's picture. Sylvester argued that there was a new interest among young painters in domestic scenes, with stress on the banality of life.

The futility, banality, and despair of life are also compellingly expressed in Bratby's autobiographical novel Breakdown, which depicts an artist in crisis. Bratby painted several kitchen subjects, often turning practical utensils such as sieves and spoons into semi-abstract shapes. He also painted bathrooms, and made three paintings of toilets. Other artists associated with the "kitchen sink" style include Derrick Greaves, Edward Middleditch and Jack Smith.

The term later became applied in Great Britain to a form of quarrelsome domestic drama epitomised by John Osborne's play Look Back in Anger. In America, the term was associated with Paddy Chayefsky and other dramatists who created gritty plays for live television during the 1950s. In 1958 Bratby created works for the fictional artist Gulley Jimson in the Alec Guinness film The Horse's Mouth. Two years later, he published a novel, Breakdown (London: Hutchinson, 1960; Cleveland and New York: World Publishing Company, 1961), that some readers found quasi-autobiographical. The novel was the first of a quartet.

Bratby's own work fell out of favour with the emergence of Pop art, but his paintings have increased in value and critical support over recent years. Paul McCartney has been a collector of his works. A portion of Bratby's painting Four Lambrettas and Three Portraits of Janet Churchman (1958) is featured on the cover of Mark Knopfler's 2007 album Kill To Get Crimson.