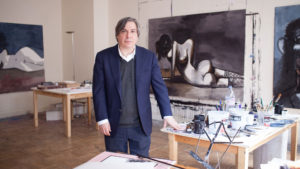 George Condo is an American artist (b.1957), known for coining the term ‘Artificial Realism’ to describe his approach to painting; ‘the realistic representation of that which is artificial’. Condo’s extremely distinctive work draws upon traditional elements in art history, particularly the portrait, realising classically executed paintings which are always surprising and often comically grotesque, thus commenting on contemporary society.

Recognised as being one of America’s most influential living artists, Condo first started exhibiting paintings which had the sensibilities of European Old Masters, subverted with references to popular American culture, including Playboy magazine, comics and cartoons. Condo has been credited with being instrumental in the international revival of painting from the 1980s onwards. His influence can be noted in the work of Sean Landers, John Currin, Lisa Yuskavage and Glenn Brown.