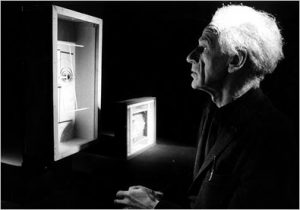 Joseph Cornell was an avant-garde American artist and sculptor, noteable for his pioneering and much-imitated assemblage boxes.

Despite being born into a middle-class merchant family, Cornell was thrown into poverty following the death of his father in 1917. Cornell went, along with his mother and his disabled brother Robert, to live in a small wooden house in Flushing, New York, where he remained for his entire life, never travelling beyond the New York City area.

A chronically shy social misfit, Cornell preferred to live in isolation caring for his brother, and became a self-taught artist, creating elaborate constructions with found objects when he was not working to support his family. He worked variously as a textile and appliance salesman, and in a plant nursery before finding his way to the magazine publishing industry where he would design covers for Harper’s Bazaar, amongst others. His work in the publishing industry lead him to create collaged tributes of adoration, often housed in glazed hand-made boxes, to famous models and actresses such as Lauren Bacall. Despite these expressions of desire, he never had a girlfriend or wife, his eccentricity, shyness, religious observation or responsibilities always proving too much. His reputation as an artist gained momentum however, and in 1949 he had a successful solo show at the Charles Egan Gallery.

Often referred to as a Surrealist, a term that Cornell rejected, he was certainly heavily influenced by the Surrealists use of irrational juxtaposition, and their easy evocation of nostalgia, when creating his works. Despite his resistence to be termed as such, he nevertheless enjoyed meeting many of the leading European Surrealists who had settled in America after WWII.

Despite having no formal training in art, Cornell was extremely well-read and was completely familar with the New York art scene from the 1940s through to the 1960s. He is often credited with anticipating Pop and Installation Art, an accolade which again, he strenuously and modestly denied.

In 1980 The Museum of Modern Art in New York held a major restrospective of Cornell’s art, the original press release for which can be read here 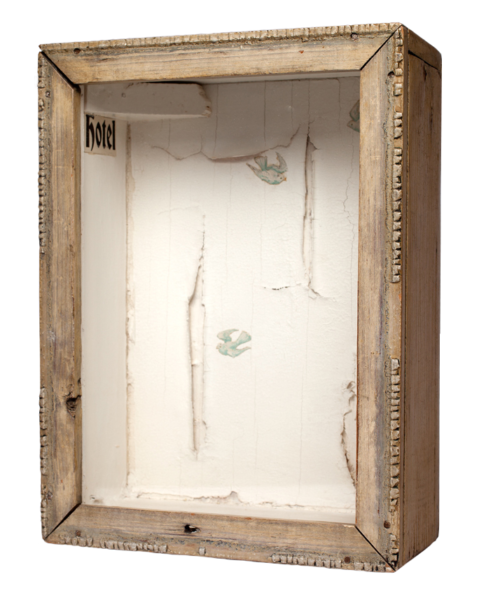