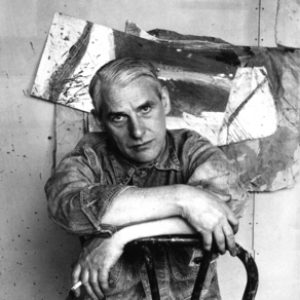 Willem de Kooning was an illegal immigrant who became one of America’s most respected and influential painters and a leading member of the Abstract Expressionist movement.
Of Dutch origin, de Kooning studied in Brussels and Antwerp before arriving in New York as a stowaway in 1926, where he found work variously as a commercial artist, window dresser, sign painter and carpenter. He would not be legally naturalised as an American citizen until 1962.

He began work for the Federal Art Project in 1935, helping paint the 105 public murals for the 1939 New York World’s Fair, at which time he met Arshile Gorky with whom he would share a studio. De Kooning’s first mature paintings were influenced in equal measure by the Surrealist style of Gorky and by the pioneering work of Pablo Picasso. As he developed as an artist he began to take inspiration from Franz Kline, Jackson Pollock and the new New York School, led by Robert Motherwell.

Working through a period of abstraction de Kooning developed his first so-called ‘Women’ paintings in 1950, causing some scandal of interpretation on account of the aggressive imagery and handling of paint when they were eventually shown at the Sidney Janis Gallery in 1953. In 1954 he was included in the Venice Biennale showing “Excavation”, now regarded as one of his most significant works. Alternating between abstraction and figuration, and occasionally fusing the two, de Kooning was held in great esteem by international collectors, curators and gallerists, exhibiting widely. In 1964 he was awarded the "Presidential Medal of Freedom", one of America’s highest honours.

In 2006, Woman III was sold privately for the reported sum of $137,500,000, which was then the second highest sum paid for any work of art ever sold. In 2011, 14 years after his death, de Kooning was honoured with a major retrospective exhibition at New York’s MoMA.