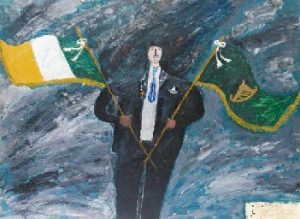 James Dixon was an Irish artist who was born on Tory Island, County Donegal, and aside from the occasional visit to the mainland, remained on the island all his life. He started painting at the age of 72, after seeing a British painter, Derek Hill, at work on a landscape on Tory Island. His story and naïve talent is similar to that of the St. Ives School painter Alfred Wallis (1855-1942), who was discovered in Cornwall by the painters Ben Nicholson and Christopher Wood. Both Dixon and Wallis were celebrated for their portrayal of the sea and boats.

Hill encouraged Dixon and provided him with oils and other art materials, although Dixon insisted on making his own paintbrushes from donkey's hair. Dixon's primitive paintings depicted a range of romantic unspoilt views of Tory Island. He used oils on paper and board, and his expressive brushwork and bold composition portrayed the raw everyday reality of life on the island. Hill introduced Dixon's artworks to the art world, thus helping Dixon to become an important figure in the history of twentieth-century Irish painting. His painting is seen as an excellent example of Outsider art.