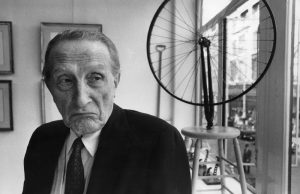 Marcel Duchamp, with Picasso and Matisse, is credited with significant revolutionary influence in the development of contemporary art in the early twentieth century. Associated with Cubism, Dada, and with an unparalleled influence on conceptual art, he is regarded as a towering figure in art history.

A student of the Académie Julian from 1904 to 1905, his early works were unremarkable and traditional although he soon developed a talent for drawing cartoons, which he also sold. These cartoons would often use verbal and visual puns, and can be recognised as the beginning of his individual contribution to art. In 1905, he began military service and was seconded to learn typography and printing processes at a printer in Rouen, skills which would prove particularly useful later in his career.

His first exhibited works, at the 1908 and 1909 Salons, were not well received. Guillaume Apollinaire in particular singled the paintings out for criticism in his reviews, which referred to "Duchamp's very ugly nudes."

By 1911, Duchamp had become friends with several of the most important young painters of the day, including Picabia, Léger, Gris and Archipenko. Duchamp gave mixed messages about what inspired him, projecting indifference and disinterest regarding Cubsim when asked to debate by his fellow artists, yet creating a painting in the Cubist style, with a development indicating motion, which was highly inventive and which he referred to as "elementary parallelism".

Duchamp's first great controversy surrounded his submission for exhibition, at the 1912 Cubist Salon des Indépendants, of Nude Descending a Staircase, No. 2 (Nu descendant un escalier n° 2), which used his elementary parallelism stylistic development, having both the fragmentation of the Cubists, and the movement of the Futurists. He was asked to remove the painting from the exhibition, the Cubists suspecting him of making fun of them. The painting was, however, included in the 1913 "Armory Show" in New York, but did not fare much better critically. This was the first major exhibition of new trends from Paris, including all the experimental styles of the European avant-garde; Fauvism, Cubism, and Futurism. The American public, still largely accustomed to realistic art, were scandalized. Despite this, Duchamp achieved a sale of each of the four paintings he had submitted, a turn of events which would prompt his decision to emigrate to America two years later.

Although often associated with the Dada movement, which rejected reason and prized nonsense and irrationality, Duchamp was never a member. Throughout the duration of the early years of WWI, his art had tended towards the surreal and had even become proto-conceptual. Arriving in New York to live, he found himself something of a celebrity, and when a soft form of Dada arrived from Europe in 1916, Duchamp was already one step ahead. He submitted Fountain, a urinal, to the Society of Independent Artists exhibit in 1917. Artworks in the Independent Artists shows were not selected by jury, and all pieces were therefore displayed as submitted. In one of the most famous turns of events in modern art, the committee subsequently insisted that Fountain was not art, and rejected it from the show. Duchamp thus contributed the notion of the "readymade" to art history, found objects which he chose and presented as art. The Fountain was one, and other famous examples included the Bottle Rack.

He was a founder member of the Société Anonyme in 1920. The group collected modern art works, and arranged modern art exhibitions and lectures throughout the 1930s. Great collectors and museum directors sought Duchamp's counsel, and he began to advise Peggy Guggenheim, as well as Museum of Modern Art directors Alfred Barr and James Johnson Sweeney.

The production of his own art declined after 1920, and instead he played competitive chess at the highest level. He eschewed invitations and associations from the avant-garde and declared his life as an artist to be over. He continued, however, to make art in some secrecy until his death, only occasionally admitting to projects such as Boite-en-Valise (1935-1941) following the realisation that he could accomodate miniaturised versions of all of his greatest works in a box.

His importance and legacy to contemporary art is difficult to overstate.