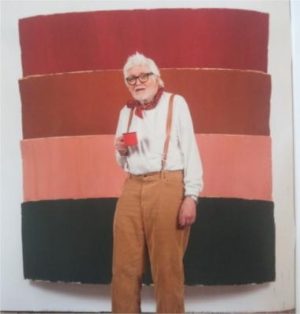 Ron Gorchov's first inclusion in a major exhibition was for the Whitney Museum's "Young America 1960: Thirty American Painters Under Thirty-Six". At that time, Gorchov was part of a group of artists working in Manhattan responding to the concept of Action Painting. Gorchov had aligned himself with Arshile Gorky's work, was close to Gorky's mentor John D. Graham, was himself a mentor to Willem de Kooning and was friendly with Mark Rothko.

From 1967, Gorchov chose to work on curved, shaped canvases, using elaborate tensioned stretchers to support the three dimensional structures. Gorchov's painting was extreme, a hybrid between painting and sculpture, with which he attempted to create new dimensions and depth, disorienting the viewer’s experience. Gorchov became a strong artistic force in the late 1960s and early 70s within a group of Manhattan-based abstract artists who rejected the standard rectangular canvas in favour of new shapes and configurations: Frank Stella, Richard Tuttle, Blinky Palermo and Ellsworth Kelly. His iconography by this time had been pared down to simple arrangements of plain colours, arranged in roughly symmetrical designs with deliberately asymmetrical interventions. Dorothy Miller, a curator at MoMA in the 60s and 70s, chose to include Gorchov for Art in America's "New Talent U.S.A.: Painting."

Gorchov held noteable exhibitions at Susan Caldwell and Pat Hamilton galleries in the 1970s, and at Marlborough and Jack Tilton galleries in the 1980s. In 1972, Gorchov installed two of his "experiments in neocontructivism: multipaneled stacks of heraldic monochromes" at the Everson Museum of Art in Syracuse, New York. One of these stacked works, titled Set, was later included in Rooms, the inaugural exhibition at P.S. 1 Contemporary Art Center in New York in 1976, while the other, titled Entrance, was also exhibited at P.S. 1 in 1979. In 2006 Gorchov's work was again shown at P.S. 1 in a solo show titled Ron Gorchov: Double Trouble. In 2013, a major work by Ron Gorchov was included in Art Basel's Art Unlimited section.

Gorchov's paintings are included in many prominent collections, including the Metropolitan Museum of Art, MoMA, the Whitney Museum of American Art, the Detroit Institute of Art, and the Guggenheim.