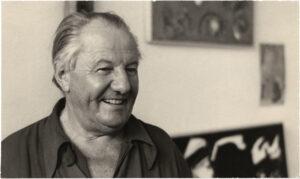 An American artist of German origin, Hans Hofmann was an influential 20th century painter and teacher whose work was critical in the development of abstract expressionism​

Born in 1880, he showed an early interest in science and mathematics but did not turn to fine art until he moved to Munich in his twenties. There he experimented with form and colour, studying alongside Kandinsky.

By 1904 and now in Paris, Hofmann embraced the avant-garde. He knew Picasso, Braque and the Delauneys, absorbed the influence of Fauvism and Cubism and studied with and under Matisse. He remained in Paris until the outbreak of WWI, then returning to Munich to establish an art school, arguably the first school of modern art in existence. His teaching expounded the theories of those artists most influential to him, particularly Cézanne, the Cubists and Kandinsky.

His students included Louise Nevelson, who was attracted by his teaching methods which included ongoing discussion of art theory, life drawing sessions and regular critiques from Hofmann himself.
His reputation as meaningful teacher of the avant-garde grew internationally and he made his first teaching trips to America in 1930. In 1932 he accepted an invitation to emigrate and continue to teach at the University of California, Berkeley.

Soon moving to the east coast he began teaching at the Art Students League of New York in 1933. A year later he opened his own schools in New York and Provincetown, and would teach many notable figures including Lee Krasner, Helen Frankenthaler, Larry Rivers, Red Grooms and others.

Of his own painting, by 1940 he began to paint completely abstract works making a small oil on panel “drip” painting. Art historians have described his works of that period as “records of the artist’s intense experience” of paint, colour, and processes that were arbitrary, accidental and direct, as well as intentional. They demonstrate Hofmann's early stylistic experimentation with the techniques that would be termed “action painting,” which Pollock and others made famous by the end of the decade.

He was championed by influential art figures like Peggy Guggenheim, Betty Parsons and Samuel M. Kootz who were part of a new era of art dealers and galleries. His first solo exhibition was at Guggenheim’s Art of This Century Gallery in New York in 1944. The influential critic Clement Greenberg considered it a breakthrough and after another exhibition in 1945, he wrote: “Hofmann has become a force to be reckoned with in the practice as well as in the interpretation of modern art.”

In the decade that followed, Hofmann's recognition grew through numerous exhibitions, largely at the Kootz Gallery, leading to a major retrospective at the Whitney Museum of American Art in 1957. Following that, and by this time almost 80 years old, he closed his schools in order to concentrate more on his own painting for his remaining years. ​In 1960, Hofmann was selected to represent the United States at the Venice Biennale, alongside Philip Guston, Franz Kline and Theodore Roszak. A further retrospective followed at the Museum of Modern Art in 1963, organised by William Seitz, which travelled to venues around the world.

Widely regarded as one of the most influential art teachers of the 20th century, he profoundly influenced painters as brilliant as Joan Mitchell and Jackson Pollock. Hofmann's works are in the permanent collections of practically every major museum in the United States and in many others throughout the world. 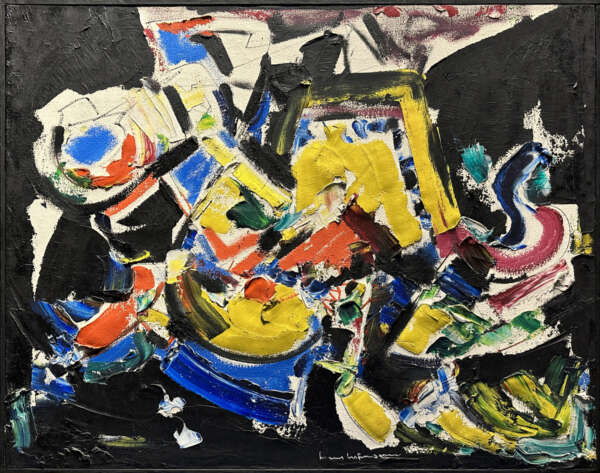