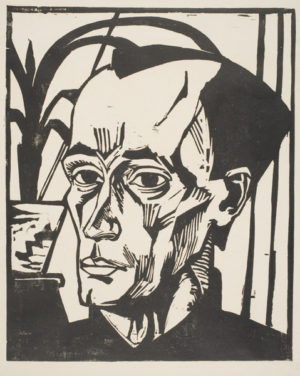 Erich Heckel was a founder member of Die Brücke, one of the most significant movements in 20th Century European Art. He and his co-founders, Karl Schmidt-Rottluff, Fritz Bleyl and Ernst Ludwig Kirchner were greatly impressed by the work of Edvard Munch, and aimed to make a ‘Bridge’ between the traditional German neo-romantic painting of the time, and emerging Expressionism. Die Brücke was completely contemporary with France’s Fauvistes, who also began in 1905, and they shared many of the same ideals.

The artists painted as much as possible but, for reasons of economy, developed printing techniques, such as hand-coloured woodcuts, to great effect. Heckel in particular devoted much of his career to printmaking. Die Brücke dissolved in 1913 having contributed greatly to the establishment of Berlin as a rival to Paris in terms of the pre-eminent, pre-war artistic powerhouse of Europe. By this time Heckel was exhibiting in Berlin in one-man-shows to much praise.

Heckel spent much of the First World War as a nurse with the Red Cross in Flanders, then re-established his career slowly in the aftermath of Germany’s defeat. His experiences in Flanders informed his style, as they did everyone of his generation and nationality, but, having worked tirelessly for almost 20 years and despite having introduced alpine landscapes of great serenity into his canon, his work was declared Degenerate by the ruling Nazi Party and 729 of his works were confiscated. He was banned from showing in public.

In 1944, Heckel’s Berlin studio suffered a direct hit during an air-raid and all of his woodcut blocks, his printing plates, and many of his works were destroyed.

Heckel subsequently moved to Hemmenhofen on Lake Constance, and in 1949 he was appointed professor at the "Akademie der Bildenden Künste" in Karlsruhe. He began to concentrate on still life painting, and held the post of professor until 1955.

A major retrospective exhibition, Erich Heckel – His Work in the 1920s, was held October 2004 – February 2005 at the Brücke Museum in Berlin. 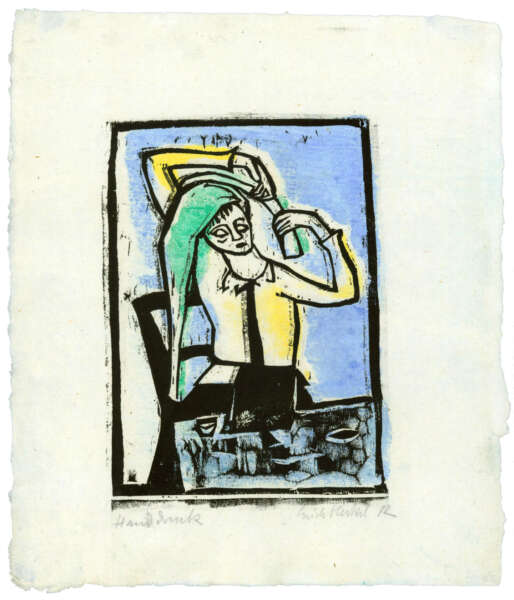 Vor dem Spiegel (In front of the Mirror) - Erich Heckel