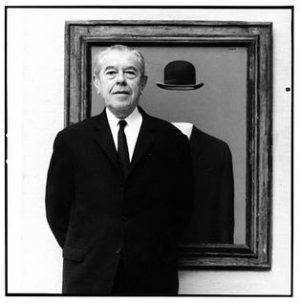 René François Ghislain Magritte was a Belgian surrealist artist, well known for his witty and thought-provoking images which challenged viewers' preconditioned perceptions of reality. His imagery has influenced pop, minimalist and conceptual art, as well as the work of the artists John Baldessari, Ed Ruscha, Andy Warhol, Jasper Johns, and Martin Kippenberger. Magritte's influence in the development of Pop art has been widely recognized, although Magritte himself discounted the connection.

Magritte's earliest paintings, which date from about 1915, were Impressionistic in style. He studied at the Académie Royale des Beaux-Arts in Brussels, later becoming influenced by Futurism and by the figurative Cubism of Metzinger. In 1926, Magritte produced his first surreal painting, The Lost Jockey (Le jockey perdu), and held his first exhibition in Brussels in 1927. Critics heaped abuse on the exhibition. Depressed by the failure, he moved to Paris where he became friends with André Breton, and became involved in the surrealist group. He became a leading member of the movement after leaving in 1927 for Paris, returning only due to despondency over the pace of his career's progress.

During the German occupation of Belgium in World War II he remained in Brussels, which led to a break with Breton. In 1946, renouncing the violence and pessimism of his earlier work, he joined several other Belgian artists in signing the manifesto Surrealism in Full Sunlight. During 1947–48, Magritte's "Vache Period", he painted in a provocative and crude Fauve style. During this time, Magritte supported himself through the production of fake Picassos, Braques and Chiricos—a fraudulent repertoire he was later to expand into the printing of forged banknotes during the lean postwar period. At the end of 1948, he returned to the style and themes of his prewar surrealistic art.

Magritte's work frequently displays a collection of ordinary objects in an unusual context, giving new meanings to familiar things. The use of objects as other than what they seem is typified in his painting, 'The Treachery of Images' (La trahison des images), which shows a pipe that looks as though it is a model for a tobacco store advertisement. Magritte painted below the pipe "Ceci n'est pas une pipe" ("This is not a pipe"), which seems a contradiction, but is actually true: the painting is not a pipe, it is an image of a pipe. It does not "satisfy emotionally"—when Magritte was once asked about this image, he replied that of course it was not a pipe, just try to fill it with tobacco.

Popular interest in Magritte's work rose considerably in the 1960s, and he is now considered on of the most famous Belgians who ever lived. His works have been frequently adapted or plagiarized in advertisements, posters, book covers and the like, and his imagery has inspired filmmakers ranging from the surrealist Marcel Mariën to mainstream directors such as Jean-Luc Godard, Alain Robbe-Grillet, Bernardo Bertolucci, Nicolas Roeg, John Boorman and Terry Gilliam.

Magritte died in 1967, aged 68. He has had two retrospective exhibitions in New York, one at the Museum of Modern Art in 1965, and the other at the Metropolitan Museum of Art in 1992.

The Magritte Museum opened to the public on 30 May 2009 in Brussels. Housed in the five-level neo-classical Hotel Altenloh, on the Place Royale, it displays some 200 original Magritte paintings, drawings and sculptures. This multidisciplinary permanent installation is the biggest Magritte archive anywhere and most of the work is directly from the collection of the artist's widow, Georgette Magritte, and from Irene Hamoir Scutenaire, who was his primary collector. Additionally, the museum includes Magritte's experiments with photography from 1920 on and the short surrealist films he made from 1956 on.

Another museum is located at 135 Rue Esseghem in Brussels in Magritte's former home, where he lived with his wife from 1930 to 1954. A painting, Olympia (1948), a nude portrait of Magritte's wife by Magritte, was stolen from this museum on the morning of 24 September 2009 by two armed men. The stolen work was said to be worth about US$1.1 million. Olympia was returned to the museum early January 2012. The thieves handed back the painting because they were unable to sell it on the black market due to its fame. 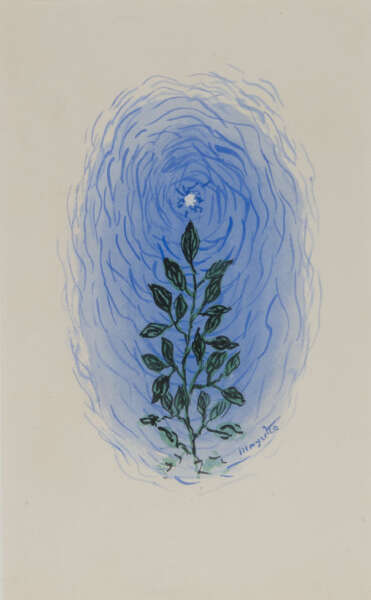