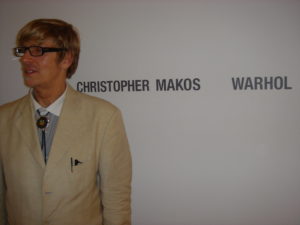 Chris Makos is the American photographer without whose advice, opinions and actions, the course of American Contemporary Art would have been very different: he introduced Andy Warhol to the work of both Jean-Michel Basquiat and Keith Haring, and taught Andy Warhol how to use his first camera.

Makos was Man Ray's apprentice in the early 1970s, before developing a style akin to boldly graphic photojournalism. He made silkscreen portraits of Andy Warhol, Elizabeth Taylor, Salvador Dalí, John Lennon and Mick Jagger for his Icons portfolio, and took a celebrated portrait of Warhol wrapped in a flag, which was featured on the front cover Smithsonian Studies, the academic journal of the Smithsonian Institution.

Makos' work has been widely reproduced, and is included in the permanent collections of more than 100 museums and significant private collections worldwide.

The artist lives and works in New York City.