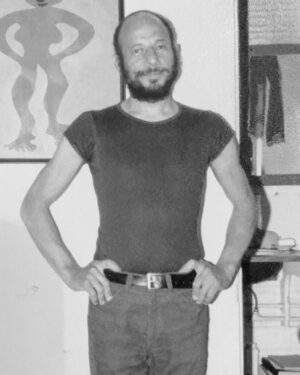 Born in 1936 in Philadelphia, Paul Waters attended Saturday classes at the city's Fleisher Memorial Art School. The artist recalled “They let me use my fingers instead of brushes”.

Waters graduated from Goddard College in Plainfield, Vermont and received his Master’s degree from the Bank Street College of Education in New York. He traveled to Europe, Africa, Asia, the South Pacific and South America before making his home and studio on the Bowery in the Lower East Side of Manhattan in the 1960s and becoming involved in the art community there. He studied closely with Romare Bearden and the Hungarian Abstract Expressionist Joseph Fulop.

Waters was fascinated by his parents’ collection of African tribal art which included artifacts from the Bariba, Ndebele and the Toma people. He has taken inspiration from them as well as ancient rock and cave paintings. Between 1965 and 1972, Paul Waters made large-scale paintings in which painted and cut canvas shapes are collaged onto primed canvases.

Waters was the subject of a solo exhibition in 1968 at the Brooklyn Children’s Museum. He was included in several historic shows of African-American artists in the 1970s, including Afro American Artists: New York and Boston, Museum of Fine Arts, Boston (1970); and Contemporary Black Art: A Selected Sampling, Florida International University, Miami (1977).

These early shows have him exhibited alongside Bearden, Jacob Lawrence and Charles White, and of his own generation Joe Overstreet, Ed Clark and Sam Gilliam .