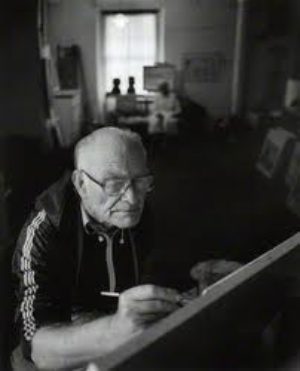 Bryan Pearce was born in St Ives, Cornwall in 1929, a sufferer, from birth, of the then unknown condition Phenylketonuria, which affects the normal development of the brain. Pearce's mother, who was a painter, encouraged her son to paint, hoping that it would have a therapeutic effect. Pearce enjoyed painting, and was astonishingly good, gaining the compassionate approval of other St Ives artists. From 1953 to 1957 he attended St Ives School of Painting.

In 1957 Pearce began painting in oils and started to exhibit regularly at the Penwith Gallery in St Ives. He became an Associate of the Penwith Society of Arts in Cornwall, and later a full member, having been sponsored by the sculptor Denis Mitchell. He also became a member of the Newlyn Society of Artists; it was at the instigation of Peter Lanyon that he had his first solo show at Newlyn Gallery in 1959.

Pearce became well known for portraying the local St Ives landscape and still-life compositions in oil, conte, pen and ink, and pencil in his unique, naïve manner. Often compared to Alfred Wallis, the late Peter Lanyon has said of him: "Because his sources are not seen with a passive eye, but are truly happenings, his painting is original."

Pearce had solo exhibitions at the Oxford Museum of Modern Art, Wills Lane Gallery, and ARCHEUS. When Pearce died, Tate St. Ives held a memorial presentation of his work. His work is held in the collections of the Tate Gallery, the Arts Council, the Contemporary Arts Society and Kettle's Yard, Cambridge.