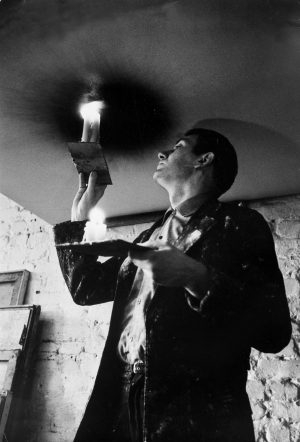 Otto Piene (1928-2014) was an avant-garde German artist, and the co-founder of the influential ZERO Group with fellow artist Heinz Mack in 1957. This group consisted of artists who wanted to redefine art after World War II. By the 1960s they were internationally known, especially in Japan, Americas, and throughout Europe. Members of the group included Piero Manzoni, Yves Klein, Jean Tinguely and Lucio Fontana.

Piene developed "Grid Pictures", in which vibrating patterns developed light as a main theme in his art. Such works, later developed with the introduction of movement whereby light bulbs would cast changing patterns of light onto the surrounding walls, were essentially experiments into the perception of space. His famous Lichtballette (Light Ballets) were part of a developing investigation into light performance, and his long-imagined "light machines".