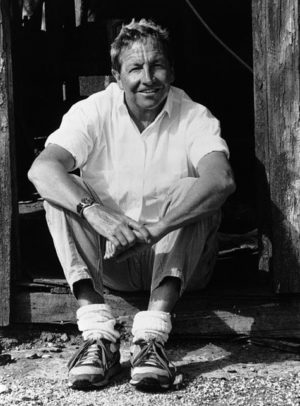 Robert Rauschenberg was an American painter whose early works anticipated the pop art movement. He is best known for his “Combines” of the 1950s: constructions in which unexpected materials and objects were employed upon painted bases.

Rauschenberg studied at the Kansas City Art Institute and the Académie Julian in Paris, and at Black Mountain College in North Carolina, under Bauhaus master Josef Albers. Albers taught that uninfluenced experimentation was to be avoided, a concept that struck Rauschenberg as non-sensical if he were to follow Albers’ guidance.

Rauschenberg married fellow artist Susan Weil, however the union was short-lived as Rauschenberg soon embarked on relationships with fellow artists Cy Twombly and Jasper Johns. Both Rauschenberg and Johns were labelled “Neo Dadaist” questioning, as they did, the distinction between art objects and everyday objects, as did Marcel Duchamp. Johns’ paintings of numbers and flags perpetuated Duchamp’s message that the observer had a vital role in creating art’s meaning, a position Rauschenberg later rejected, wishing to reclaim the all-important role of creator. In 1961, Rauschenberg was to submit a work for an exhibition of portraits. He sent a telegram which declared “This is a portrait of Iris Clert if I say so.”

In the early 50s Rauschenberg travelled extensively with Cy Twombly. In Morocco, he created collages and boxes from found objects and exhibited them at galleries in Rome and Florence. Many sold, but those that did not were thrown in the Arno. His use of found objects stemmed from wanting “something other than what I could make myself and I wanted to use the surprise”. By 1962, Rauschenberg’s paintings were beginning to incorporate found images as well as found objects - photographs were transferred to canvas by silkscreen. In taking this technique from the commercial world, with very similar contemporary concerns to Andy Warhol, both Rauschenberg and Johns are regarded as important forerunners of American Pop Art.
Rauschenberg developed a technique of printing on textiles by solvent-transfer which he refined to be effective on a variety of reflective metals, such as steel, aluminium and brass.

Rauschenberg had his first career retrospective at the Jewish Museum, New York, in 1963, and in 1964 he won the Grand Prize at the Venice Biennale, becoming the first American so to do. A retrospective organised by the National Collection of Fine Arts (now the Smithsonian), Washington, D.C., soon followed, travelling throughout the United States in 1976 and 1978. Further retrospectives and exhibitions were to be held at the Guggenheim, New York, Bilbao and Venice, the Met, and the Pompidou.