DeWain Valentine is an American artist connected to the Light and Space movement originating in Southern California in the 1960s, pioneering the use of new materials now commonplace in art making: fibreglass, plexiglas, cast acrylic and polyester resin.

Taking its name from the title of the exhibition at UCLA which introduced the emerging group in 1971: "Transparency, Reflection, Light, Space: Four Artists", Light and Space consisted of several loosely affiliated artists working in various media and included Valentine; John McCracken; James Turrell; Larry Bell and many others. Using glass, lights and reflective, translucent or semi-transparent materials, the artists were concerned with perceptual phenomena, forming pieces and installations conditioned by the work's surroundings. They sought to play with the light, by directing or altering its flow or embedding it within objects or architecture. Turrell, arguably the most famous of the movement, summed up its philosophy in saying, "We eat light, drink it in through our skins."

Valentine's first attempt to establish himself as an artist in New York was unsuccessful, his earliest art pieces were made from plastic. “The galleries would look at my slides and say: ‘Oh my, that’s lovely! What is it made out of?’ And I’d say, ‘Plastic,’ and that was that..it wasn’t something one made art out of apparently.”

Arriving in Los Angeles in 1965, he found Larry Bell and Peter Alexander were in the early stages of creating the spare, luminous aesthetic that came to be known as the Los Angeles Look or Finish Fetish. Sleek synthetic materials had become available via the latest technologies of the Southern California-based engineering and aerospace industries, a host of suggestive elements which the artists could mould and idealise to create sensuous, light-filled objects. Valentine spoke of wanting a way “to cut out large chunks of ocean or sky and say: ‘Here it is.’ ”

Favouring poured polyester resin, which hardens in a mould, he soon developed a close relationship with one of his suppliers, the Hastings Plastics Company in Santa Monica. In 1970, as a result of his studio experiments, the company introduced a new kind of highly stable resin named Valentine Maskast Resin No. 1300-17, which had extremely impressive properties of tensile strength and came to be used widely in a number of commercial applications.

Valentine had his first solo show at Ace Gallery in 1968. He featured prominently in the Getty's defining exhibition of California minimalism Pacific Standard Time in 2012. The Museum of Modern Art holds his work in their permanent collection.

The legacy of the Light and Space movement can be seen in the work of important artists of the current contemporary generation, such as Olafur Eliasson. 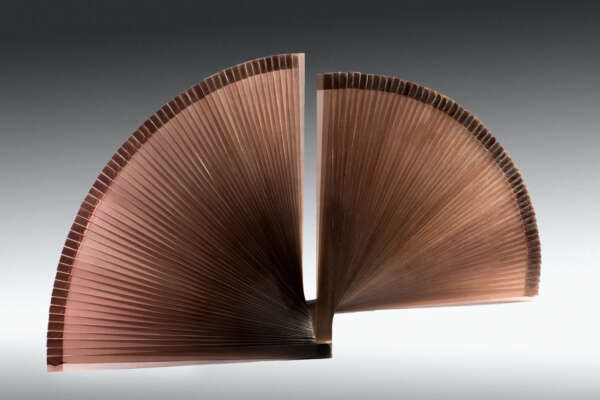