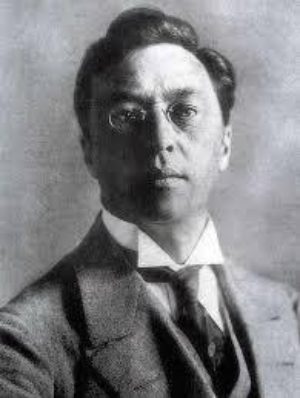 Russian painter and art theorist Wassily Kandinsky is often credited with painting one of the first purely abstract modern works. Kandinsky’s colourful, dynamic works are informed by a uniquely spiritual interpretation of art making. His book Concerning the Spiritual in Art (1910) is regarded as one the most influential art theories of the 20th century.

Born in Moscow in 1866, he was raised in Odessa and studied at Grekov Odessa Art School before attending law school. Despite a promising law career, Kandinsky moved to Munich in 1896, at the age of 30, where he enrolled in the Munich Academy to study painting. Before leaving Russia, Kandinsky saw an exhibition of paintings by Monet. He noted with wonder that a painting from the Haystacks series had a powerful sense of colour almost independent of the objects themselves. Later, he would write about this experience which would lead him to abstraction:

"That it was a haystack the catalogue informed me. I could not recognise it. This non-recognition was painful to me. I considered that the painter had no right to paint indistinctly. I dully felt that the object of the painting was missing. And I noticed with surprise and confusion that the picture not only gripped me, but impressed itself ineradicably on my memory. Painting took on a fairy-tale power and splendour"

More so than many artists of the time, Kandinsky was influenced by music and spiritual philosophy. Kandinsky read and espoused theosophy, a theory that posits creation as a geometrical progression starting with a single point and continuing through a series of circles, triangles and squares. Perhaps the most important painting of the early 1900s, Der Blaue Reiter (The Blue Rider), 1903, shows a mysterious cloaked figure on horseback riding through a hilly terrain as strange deep blue shadows are cast on the ground. During these years Kandinsky began to emerge as an important art theorist.

As his interest in theosophy grew, with its emphasis on the spiritual nature of geometric forms, his works became more abstract and in 1910 he published his seminal Concerning the Spiritual in Art, which advocated for abstract art as a means of achieving the spiritual. The book had far reaching international impact.

Though Kandinsky went back to Moscow in 1914, he later returned to Germany and began teaching at the Bauhaus in Weimar. Kandinsky was one of Die Blaue Vier, formed in 1923 with Paul Klee, Lyonel Feininger and Alexej von Jawlensky, which lectured and exhibited in the United States. Due to right-wing hostility, the Bauhaus left Weimar and settled in Dessau in 1925. Following a Nazi smear campaign the Bauhaus left Dessau in 1932 for Berlin, until its dissolution in July 1933. Kandinsky left Germany for France, which would remain his home until his death in 1944.

Kandinsky’s paintings and drawings are included in museum collections around the world, notably the Solomon R. Guggenheim Museum, New York, and the State Tretyakov Gallery, Moscow, as well as the Centre Pompidou, Paris, and the Museum of Modern Art, New York