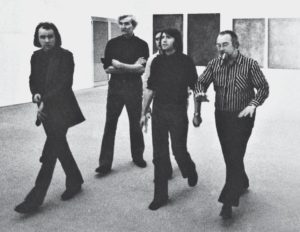 German artist Winfred Gaul was among the pioneering artists of Art Informel, an abstract movement that originated in Germany and spread to France and throughout Europe in the postwar era.

Born in Düsseldorf in 1928, Gaul began his artistic career as an apprentice to a sculptor studying at the University of Cologne, and then in Stuttgart under Willi Baumeister. In 1953 he travelled to Paris and acquainted himself with the critics Pierre Restany (the man who coined the term Nouveau Réalisme), and Julien Alvard, both of whom helped shape Gaul’s understanding of abstraction and the need for a new artistic language in the postwar era. Having returned to Düsseldorf in the mid-1950s, Gaul became close to the artist Peter Brüning, with whom he would go on to collaborate. Soon, his artistic circle would expand to include the artists Karl Otto Götz, Bernard Schultze, and Heinz Kreutz. With some of these artists, Gaul would come to form Gruppe 53, the group that would ultimately pioneer the subversive and subjective Art informel style that served as a counterpoint to American Abstract Expressionism. During this period, he met with critical recognition, and his works were purchased by major institutions.

Gaul soon abandoned the Art Informel style however and adopted an analytic, colour-driven approach to painting, a move that caused dismay among many of his supporters. In 1962, in the midst of this change, he traveled to New York at the invitation of the great critic and curator Clement Greenberg. The trip seemed to strengthen his change in direction, perhaps becoming aware, like Mondrian, of the incessant energy and haphazard traffic of Manhattan’s streets. Gaul began to picture these icons of the urban environment in new colours and orientations, and embarked on his “Verkehrszeichen & Signale” (Traffic Signs and Signals) series of brightly hued and geometric canvases, which made up almost the entirety of his practice for the next two decades. Gaul referred to these works as “totems” and, on occasion, he brought his paintings to the street to display them alongside actual street signs. In this way, he seemed to call attention to the visual language to which a society or culture has, almost unconsciously, assigned a collective meaning or value. At once, he subverted these signs whilst also elevating them, freeing the shapes to assume new meanings.

Gaul's canvases align with the practices of American Color Field artists Kenneth Noland and Ellsworth Kelly, who also were experimenting with the power of immersive colour during these same years.

The artist participated in Documenta 6, Kassell in 1977 and was the subject of several major museum exhibitions throughout the 1970s and early 1980s.