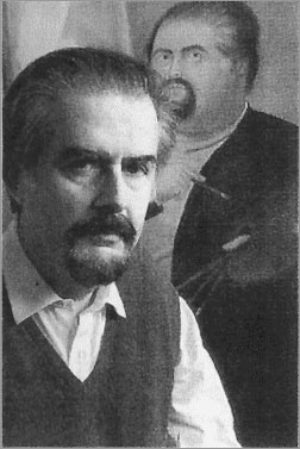 Fernando Botero is a Columbian artist, best known for his figurative paintings and sculptures which depict disproportionately large people and animals in everyday scenes.
Botero worked initially as a set designer in Columbia before moving to Madrid to study art. During the 1950s he lived in Paris and Florence, studying and painting, occasionally returning to Columbia to exhibit, where his work was beginning to command a respectful following. In 1958 he won the Salón de Artistas Columbianos.

Botero refers to the figures in his situational portraits as “fat’ figures, but is not entirely sure how the figures came to populate his works in the way they do: He says, "An artist is attracted to certain kinds of form without knowing why. You adopt a position intuitively; only later do you attempt to rationalize or even justify it."

In 2005, Botero achieved enormous acclaim for his Abu Ghraib series, which was based on reports of United States forces' abuses of prisoners at Abu Ghraib prison during the Iraq War. The series was exhibited widely including, controversially, in Washington, DC. All of the works were to be donated to museums.

Botero’s work is exhibited and held by a great many institutions and collections worldwide, and he is regarded by many to be Latin America’s most important living artist.