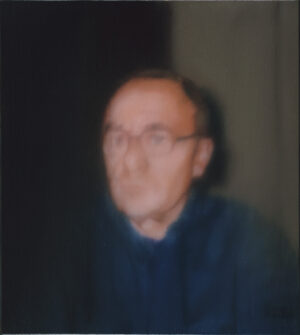 Generally considered to be one of the most important living artists in the world, Gerhard Richter's diverse paintings cover a range of artistic genres, from Realism and Naturalism to Impressionism, Pop Art, Conceptualism, and Post-Abstract Expressionism.

Born in Dresden in 1932, Richter's childhood spanned a tumultuous and horrific period in world history, one which would impact his development both artistically and intellectually. He would later depict subjects as varied as a Nazi uncle, fighter planes, religion, landscapes, gangs of young German terrorists and his own wife and child. Richter's schoolteacher father embraced Nazism and fought for the regime on the Eastern and Western fronts. He died, as did Richter's uncles, during the war. It was the artist's mother who showed Richter literature, philosophy and music and encouraged his interest in painting and drawing.

Richter left grammar school at 15 years of age, taking a series of jobs which included decorating banners for the East German communist regime and painting sets for a theatre. Intent on studying art more formally, he was admitted into the Hochscule für Bildende Kunste in Dresden at his second application in 1952. Upon graduation, Richter obtained work painting murals. His first official commission, a mural of bathers for the German Hygiene Museum, was executed in the approved bombastic style. Soon Richter was attracting recognition as well as a steady income, allowing him the opportunity to travel outside East Germany. On one excursion to the West in 1959, Richter received permission to visit Documenta 2 in Kassel, where he first discovered Abstract painting. Many of the artists represented at the event were completely unknown to the artist at the time. Lucio Fontana and Jackson Pollock, amongst others, impressed him most of all

In 1961, shortly before the erection of the Berlin Wall, Richter fled Dresden for West Germany, enrolling in art school in Düsseldorf at the Staatliche Kunstakademie. Here, Richter unlearned everything he had been taught at the conservative school in Dresden. At Düsseldorf, he studied with Art Informel or gesture painter Karl Otto Gotz and also worked for a brief period in an aggressive style influenced by Alberto Burri, Jean Dubuffet, Jean Fautrier and Fontana. The same year Richter entered the school, Joseph Beuys, who would become one of the most famous artists of the post-war era, was named professor of monumental sculpture. Richter kept his distance from Beuys throughout his years as a student, but the two would eventually become faculty colleagues with Richter himself appointed professor at the academy some years later. At school, Richter also met German trendsetters Sigmar Polke and Blinky Palermo, as well as Konrad Fischer. Along with Fischer and Polke, Richter developed an interest in the burgeoning Pop Art scene. They particularly enjoyed the work of Andy Warhol, Roy Lichtenstein, and Claes Oldenburg.

In 1963, Fischer and Richter traveled to Paris, introducing themselves to art dealer Ileana Sonnabend whom they hoped would show their work. Returning home unsuccessful yet undeterred, they mounted two exhibitions of their own work a year later. These events provided the first occasions for Richter to show his photo-based paintings. One of his earliest works is the modest 1962 painting "Table." On the painting's surface is an aggressive brush of grey paint in looping arcs, forcing the viewer to look through the scribbles to see the room. Richter continued for the next few years to concentrate on the blurred but precise photographic style that became his trademark.

In the mid-1960s, Richter turned to painting his series Colour Charts, similar to the paint charts found in stores but larger and with the colours in no discernable order. They were actually, according to Richter, picked at random. The paintings contained elements of Pop Art and Minimalism, though they were neither. From the colour chart pieces, Richter turned to art inspired by the works of Carl Andre, Sol Lewitt, Robert Ryman and Dan Flavin, as well as the techniques of Conceptualism. His paintings of this period are minimal landscapes and seascapes, exemplified in the monochromatic series Gray Pictures.

By the early-1970s, Richter produced an impressive photo-based series of figurative works before pivoting back and forth to abstraction and employing an array of incongruous stylistic gestures. In the 1980s, Richter, after beginning a series of Candle paintings, returned to photorealism with what is considered one of the most significant series in this domain with October 18, 1977, also known as the Baader-Meinhof paintings.

By the late 1980s, Richter developed a technique of abstraction which employed dragging a squeegee across the surface of the painting to create what is now regarded as his most recognisable body of work. The colourful, wet on wet creations are unmistakeable and highly prized. A single Abstraktes Bild sold for $46 million at auction at Sotheby's in 2015. Throughout his career Richter numbered all of his major works. The 30-ft stained glass windows at the Benedictine Abbey of Tholey, Switzerland (no.957) are, according to the artist, his last work.

Richter's work has been the subject of numerous monographs, exhibitions, and retrospectives, and he is represented in permanent collections throughout the world. 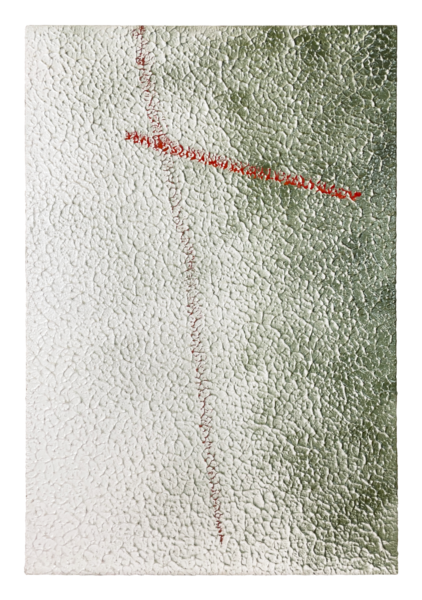