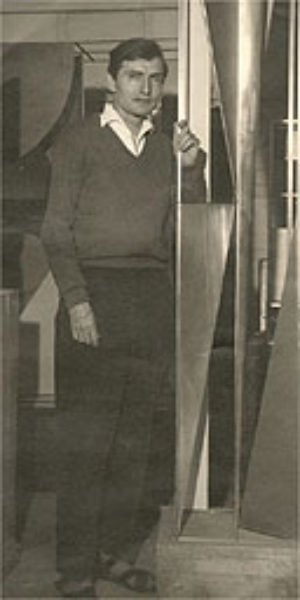 Stephen Gilbert was born near Perth, in Scotland in 1910, of English parents, the grandson of the sculptor Sir Alfred Gilbert. He studied painting at the Slade School, London, where he befriended Roger Hilton.

Gilbert’s early art was inspired by travels to Paris and in particular by Andre Masson. He showed these with the White Stag Group in Dublin in 1944.

Returning to Paris after the war, he lived extremely frugally. In 1948 he showed his paintings at the Salon des Surindépendants where they attracted the attention of the Danish artist Asger Jorn, who invited him to join the recently formed radical group, CoBrA. Apart from William Gear, Gilbert was the only British member. He held an important position within Cobra, painting a central wall in the house they decorated with murals at Bregnerod, near Copenhagen, in 1949, and being the subject of a monograph in the series Petite Bibliothèque de Cobra. He also worked with the Dutch member, Constant Nieuwenhuys, in Amsterdam and Paris.

Together, in 1950 and 1951 Gilbert and Constant developed the febrile imagery of Cobra into an abstract art of loose geometric forms and restricted colours, chiefly black and white. In Holland they studied Mondrian, Malevich and Rietveld, and, in the face of the rising tide of tachisme in Paris, structured their paintings of 1952 to 1953 with clear geometric planes coloured with strong primary colours on white grounds.

Wanting his colour planes to occupy real space, Gilbert moved from painting to three-dimensional, orthogonal constructions in 1953 to 1954, precisely made from painted aluminium sheets. His move linked him to the English group of constructivist artists gathered around Victor Pasmore, including Anthony Hill and Kenneth and Mary Martin, and he showed with this group in London in 1954.

In 1955 Gilbert moved further towards an architectural realisation of his ideas with a model for a house to be built in Yorkshire by an enlightened developer, Peter Stead. Further projects followed for blocks of flats made of mass-produced coloured metal and glass panels but, in the end, only two houses were built, and without Gilbert's collaboration. But he continued to develop his constructions, and in 1957 abandoned rectilinear frames and let coloured planes, in reacting curves, stand on their own. By 1960 he had ceased to use colour, relying on curved planes of polished metal, spreading from a central stem, to reflect the light and the environment in which they were placed. He achieved some fame with these works, winning first prize for sculpture at the Tokyo Biennale in 1965.

His last exhibition was organised by the Henry Moore Institute in Leeds in 2006, in the year before his death.