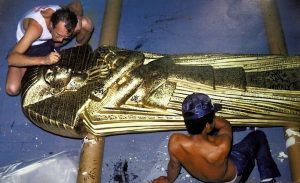 LA II (Angel Ortiz) (b.1967) is a grafitti artist from New York, noted in particular for his collaboration works with Keith Haring.

LA (“Little Angel') II is also known as LA2 or LA Rock, all tags which have been seen in his artwork. LA II met Keith Haring in 1980 at the age of 13 when he was already one of the most recognizable graffiti artists in New York's Lower East Side. The two would form a collaborative partnership for 5 years, during which LA II dropped out of High School to travel the world working together with Haring.

LA II's role in Haring's life and work can be compared to that of Jean-Michel Basquiat to Andy Warhol, in that a brief and intense period of collaboration forms a clearly recognisable and unique body of work in the development of the more senior artist.

“All the work [Angel and I did] was about surface and usually covers or transforms the object it is applied to”, Haring said of the partnership. Haring and LA II combined their styles, often working in day-glo colours, graffiti writing mixed with the contemporary and ancient symbols that had become Haring's visual language. LA II and Haring were constant creative partners for half of Haring’s decade-long career, and LA II's position in Haring's world is only now being reassessed and reevaluated.

LAII subsequently collaborated with Richard Hamilton. In 2008 he was famously caught tagging his name on a restored Haring outdoor mural without permission, and in 2011 he went to jail for one month due to graffiti offences around Manhattan. LA II lives in New York and works to continue creating graffiti art.