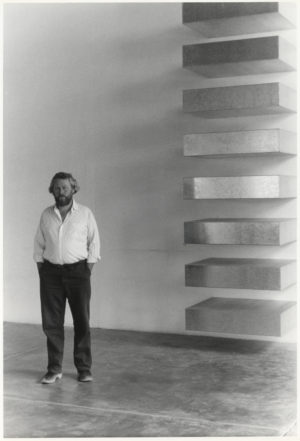 Donald Judd was one of the foremost American artists of the postwar era and a major figure in the Minimal Art movement. Judd, however, disliked the word Minimalist, calling himself "an empiricist" when pressed, and refused to call his work sculpture because he thought that implied carving.

Throughout the 1950's, Judd worked, with increasing dissatisfaction, in painting, trying to build on the innovative scale and strong colours of the Abstract Expressionists. Convinced that representational art was a thing of the past, his images became simpler and more geometric.

Once he found his mature style, Judd pursued his severely reduced vocabulary with a conviction that few other Minimalists matched. He was a master of scale and detail, for whom the thickness of a sheet of metal or the placement of screws were of paramount importance. He could cover an enormous wall with a grid of slanting plywood planes that measured space in simple but forceful rhythms, or set the interior of a copper-sided box aglow with an unexpected bottom plane of red-painted steel.

Judd's art descended from a line of visionary abstractionists that included Mondrian, Malevich and Barnett Newman. Critics both pro and con frequently remarked on the moral integrity of his work, as well as the beauty of his unadorned surfaces, calling him an "exquisite Minimalist". While both his art and his thinking were often seen as having directly influenced Conceptual Art, Judd declined to take credit, maintaining that "Art is something you look at."

Like the efforts of other Minimalists, including Dan Flavin, Frank Stella, Carl Andre and Robert Morris, his simple, factory-made forms were seen as "radically depersonalized". Much was made of the fact that Judd's work was fabricated by others, a development he defended strenuously. One of his most famous, and most misconstrued, pronouncements was "Art need only be interesting."

Throughout his life, he was known for turning his various domiciles into subtle gesamtkunstwerks in which art, furniture and quantities of open space created a spare, stylish look. He applied his stringent visual standards to everything around him, not only his collection of art and furniture, but also objects of everyday use. More than one visitor to Judd's cast-iron building in SoHo recalled being offered single-malt Scotch in a Baccarat glass that so generous in scale it was heavy to the hand. Disdainful of anthropomorphism in any form, he said he admired Scottish bagpipe music because it was the only music that did not remind him of conversations.

Judd was, before artistic success, an established and forceful critic. In the late 1950's and early '60s, his terse reviews in Arts magazine established him as a rigorous advocate of new art who was especially well known for arguing that painting was, in his words, "finished." Blunt, judgmental and drily humorous, his writing helped identify a new generation of artists and lift the New York art world out of the doldrums of second-generation Abstract Expressionism and away from what he saw as tired European esthetic conventions. He championed John Chamberlain's violent, gaudy crushed-car sculptures, Claes Oldenburg's soft Pop Art sculptures, Lee Bontecou's menacing canvas reliefs and Frank Stella's flat, slablike stripe paintings.

By the late '60s, his sleek cubic and rectilinear works had helped redefine the direction of postwar sculpture, eliminating pedestals and stressing open, somewhat weightless volumes characterized by lush metals and translucent or opaque plexiglass. His art insisted that explorations of space, scale and materials could be ends in themselves. He also created handsome woodblock prints in single colours, the compositions determined by mathematical progressions.

By 1962 he was making freestanding objects, quirkily aggressive boxes, ramps and open structures, many of them painted his favorite color, cadmium red light. These pieces, seen in his 1963 exhibition at the Green Gallery, gave him an artistic reputation to match his critical one, and he then gave up reviewing. In 1966 he joined the Leo Castelli Gallery; he was later represented by the Paula Cooper Gallery and then the Pace Gallery. In 1968 the Whitney Museum of American Art mounted a survey of his work, the first of many exhibitions at major museums in this country and abroad.