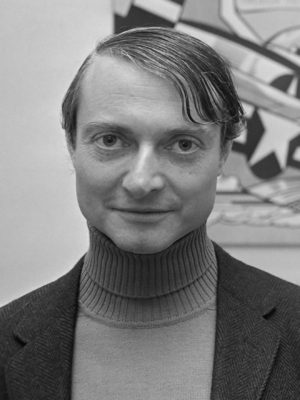 Roy Fox Lichtenstein was an American pop artist. During the 1960s, with Andy Warhol, Jasper Johns, and James Rosenquist, he became a leading figure of the new movement. His work was influenced by popular advertising and the comic strip. He was represented to great acclaim by the influential dealer Leo Castelli in New York. Born into a privileged Upper West Side, New York family, Lichtenstein’s first interest in art developed as a hobby, through school. He decided to study fine arts at Ohio State University, however his time there was interrupted by World War II. He joined the Army, eventually serving as an artist.

In 1951, Lichtenstein had his first solo exhibition at the Carlebach Gallery in New York, painting in a style that fluctuated between Cubism and Expressionism, before developing an Abstract Expressionist style. By 1958 however, he began to incorporate hidden images of cartoon characters such as Mickey Mouse and Bugs Bunny into his abstract works

Lichtenstein began his first pop paintings in 1961 using cartoon images and techniques derived from the appearance of commercial printing. His first work to feature what would become his signature use of Ben-Day dots was Look Mickey (1961, National Gallery of Art, Washington, D.C.). This piece came from a challenge from one of his sons, who pointed to a Mickey Mouse comic book and said; "I bet you can't paint as good as that, eh, Dad?”

Leo Castelli started displaying Lichtenstein's work at his gallery in New York. Lichtenstein had his first one-man show at the Castelli gallery in 1962; the entire collection was bought by influential collectors before the show even opened.

Lichtenstein used oil and Magna (early acrylic) paint in his best known works, such as Drowning Girl (1963), which was appropriated from the lead story in DC Comics' Secret Hearts No. 83. Drowning Girl now hangs in the Museum of Modern Art, New York. When Lichtenstein's work was first exhibited, many art critics of the time challenged its originality. His work was harshly criticized as vulgar and empty. The title of a Life magazine article in 1964 asked, "Is He the Worst Artist in the U.S.?" Lichtenstein responded to such claims saying: "The closer my work is to the original, the more threatening and critical the content. However, my work is entirely transformed in that my purpose and perception are entirely different. I think my paintings are critically transformed, but it would be difficult to prove it by any rational line of argument." In a later interview, suggesting that it was at times difficult to be criticised, Lichtenstein said, "I don't doubt when I'm actually painting, it's the criticism that makes you wonder, it does." In Lichtenstein’s, and pop and appropriation art’s support, cartoonist Art Spiegelman commented that "Lichtenstein did no more or less for comics than Andy Warhol did for soup."

His most celebrated image is arguably Whaam!, 1963, one of the earliest known examples of pop art, adapted from a comic-book panel drawn by Irv Novick in a 1962 issue of DC Comics' All-American Men of War. It was purchased by the Tate Gallery in 1966, after being exhibited at the Leo Castelli Gallery in 1963, and is now one of the most visited paintings in the collection of the Tate Modern.

Lichtenstein largely abandoned comic-strip based imagery in 1965 and began his Modern Paintings series, including over 60 paintings and accompanying drawings. Using his characteristic Ben-Day dots and geometric shapes and lines he rendered incongruous, challenging images out of familiar architectural structures.

The artist had his first retrospective at the Guggenheim Museum in 1969. A major retrospective opened at the Art Institute of Chicago in May 2012 before going to the National Gallery of Art in Washington, Tate Modern in London, and the Centre Pompidou in Paris in 2013.

In January 2017, collector and philanthropist Agnes Gund sold the 1962 painting Masterpiece for $165 million. 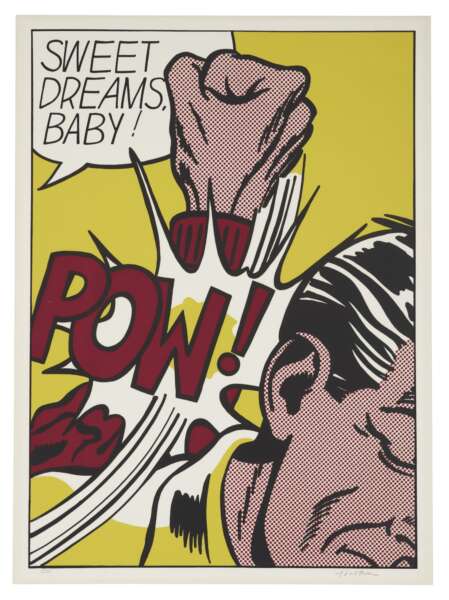