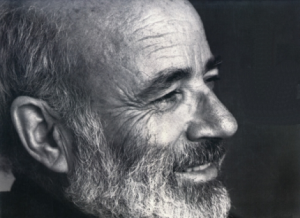 Panagiotis Vassilakis, known as the artist Takis, was born in Athens in 1925. He received no formal training, but read about and became interested in the sculpture of Picasso and Giacometti whilst in prison for political activism in his teens. He moved to Paris in 1954 to live and work as a sculptor.

Takis, also nurturing a fascination with science, quickly became interested in incorporating electric light into his sculptures. He made the first of his famous Signal works in 1955, inspired by advancements in the field of radar. The Signals developed to become kinetic and flexible, and some resembled radio antennas. His work soon incorporated magnetism, and he established a lifelong interest in the gap between art and science, eventually becoming a visiting researcher at M.I.T. in Massachusetts.

He married the artist Liliane Lijn, and exhibited in several influential exhibitions at Hanover Gallery and Indica in London. In 1967 he participated in the Light and Motion exhibition at the Musée d'Art Moderne de la Ville de Paris.

No stranger to protest, in January 1969 during the exhibition The machine as seen at the end of the mechanical age, at MOMA in New York, Takis stormed into the museum and removed one of his Télésculptures which he claimed was being exhibited without his permission.

Takis represented Greece at the 46th Venice Biennale where he declared: "I am a citizen of the world" and "annuled" the Greek pavilion as a symbolic gesture of the annulment of frontiers in art; choosing to exhibit in the open space in front of the pavilion.