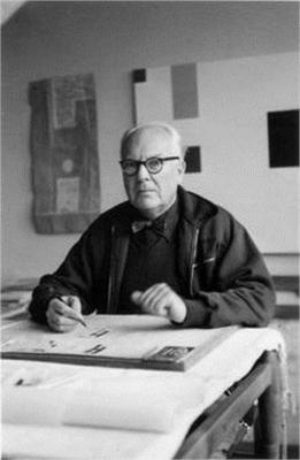 Camille Graeser belonged to the group of Zurich Concretists which included Max Bill, Verena Loewensberg, and Richard Paul Lohse. His art is constructed from logical compositions based on geometry – the dimensions and values of colours, forms, and lines but with a very personal lyricism.

Graeser was a successful interior architect, product designer, and advertising graphic designer in Stuttgart, where he took part in major exhibitions by the association Werkbund and in 1927 was invited to create furniture for Mies van der Rohe. He was forced to flee to Zurich after the Nazis came to power in 1933. Very few of his expressive and cubist-futurist drawings and watercolours from that time survived. In 1937, Graeser became a member of the artists’ association Allianz, which publicly promoted new artistic tendencies, especially Concrete Art as represented by Hans Arp and Theo van Doesburg. He aligned himself with the principles of Concrete Art, and his compositions were soon dominated by horizontal and vertical lines and squares. He later applied systematic principles of composition – such as addition, progression, rotation, and a rhythmic use of elements to create a playful impression.

From the 1950s on, he created dynamic compositions with bars in which he consistently investigated the relations between forms and colours. In his later works, a little square occasionally breaks out of rank as, for example, in his so-called dislocation or translocation works. As well as creating drawings and paintings he also constructed painted wooden bas-reliefs as well as rod sculptures, and from 1965 on, he made artist’s multiples and screen prints based on already realised pictorial ideas.