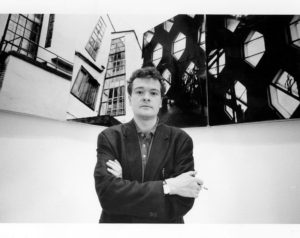 In the early 1970s, Günther Förg was a student at The Academy of Fine Art Munich. Förg developed a practice grounded almost exclusively in grey and black monochrome. These early investigations into gray – also called ‘Gitter’ paintings – demonstrate the beginning of a lifelong commitment to conceptualism. As he stated, ‘Grey is nothing: not white, not black. Something in between. Not concerned with the figure. Something free.’ While the artist later incorporated colour into his monochrome series, his use of grey represents a neutral foundation from which he conceived his oeuvre.

In the 1980s, Förg began utilising photography, printing large-format images of culturally- and politically – significant architectural structures, from Bauhaus buildings in Tel Aviv to Fascist constructions in Italy. This diversification of material and form led Förg to abandon painting altogether, and for some years he pursued a purely photographic practice as a reaction against painting itself. Throughout the 1980s and 1990s, his photographic works achieved critical acclaim and were exhibited at major museums internationally, including the Kunsthalle Bern in Switzerland and The Solomon R. Guggenheim Museum, New York NY. During this time, Förg also began experimenting upon the exhibition space itself, painting over the gallery walls, and positioning photographs against his own paintings.

Förg entered a new phase of experimentation in the late 1980s, which brought him back to painting, but also included the embrace of new materials for him, such wood, copper, bronze, and lead. Förg’s renowned lead series – acrylic painted on sheets of lead and supported by wooden frames – blurs the line between painting and sculpture in an evolution towards object-making. Also initiated during the 1980s, his bronze sculptural practice indicates a painterly quality, with indentations and marks that are reminiscent of a brushstroke, as he attempted to replicate a moment frozen in time.

In pursuit of further artistic experimentation Förg began producing fragmented body-part sculptures in the early 1990s, describing this arrival at figuration as inevitable. These new works embraced the materiality of their making; the heavy, weathered, and scratched surfaces of the sheets of metal, lead, and wood hint at something that is simultaneously formal and expressionist, geometric and free.

By the beginning of the 21st century, Förg’s paintings had left the formality of Minimalism behind. In a new direction, he incorporated a brighter palette and more expressive hand with a series of grid-like marks and intersecting colors. These paintings – called ‘Gitterbilder’ (grid paintings) – command a similar freedom of form and sensuality that has led to critical comparisons to Cy Twombly. Other works from this era portray vast canvases of negative space interrupted by colorful, gestural hatching and mark-making. Förg’s ultimate return to expressive painting indicates a completion of sorts – a full-circle arrival at painting as a synthesis of experimentation, rooted in art history. Förg uses the language of abstraction employed by American artists such as Barnett Newman and Frank Stella as well as German artists such as Blinky Palermo and Imi Knoebel, but uses it in a contradictory, often surprising fashion that is mindful of the failings of modernist theories of painting.

In the artist’s own words, ‘I think painting is a resilient practice; if you look through the history of painting it doesn’t change so much and we always see it in the present. It is still now.’