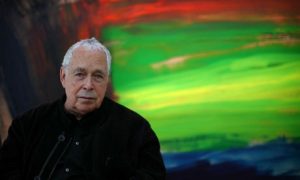 Howard Hodgkin is an English painter and printmaker, living and working in London. He became concerned to make the picture an object, and from the late 1960s he has painted on wooden supports, such as framed drawing boards or door panels, allowing the paint to cover every undulation of the framed surface.

Hodgkin's paintings are generally small in scale, and created painstakingly slowly, sometimes spending four years or more on one work. During this process any original imagery is obscured, leaving an entirely abstract plane bearing little or no relation to any title.

Awarded the second Turner Prize, Hodgkin has had major retrospective exhibitions at the Tate and Hayward Galleries in London and the Metropolitan Museum in New York. He has represented Britain at the Venice Biennale and his work is included in every serious institutional collection of contemporary art worldwide.