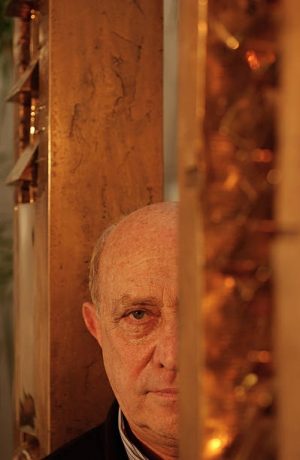 Arnaldo Pomodoro is arguably Italy's best known living sculptor. He was born in Morciano in 1926. His brother, Giò Pomodoro (1930–2002) was also a sculptor.

From the mid-1940s until 1957 Pomodoro served as a consultant for the restoration of public buildings in Pesaro, while also studying stage design and, importantly, working as a goldsmith. In 1954 he moved to Milan, where he met the artists Enrico Baj and Lucio Fontana. His work was first exhibited that year at the Galleria Numero in Florence and at the Galleria Montenapoleone in Milan. While in Paris in 1959 he met Alberto Giacometti and Georges Mathieu, before travelling to the United States to organise exhibitions of contemporary Italian art. Pomodoro met Louise Nevelson and David Smith, and shortly afterwards participated in the 1963 São Paulo Bienal, where he was awarded the International Sculpture Prize. A solo show of his work was included in the Venice Biennale of 1964. In 1965 he was given the first of many solo exhibitions at the Marlborough galleries in New York and Rome.

The artist taught at Stanford University in 1966 and two years later at the University of California at Berkeley; in 1970 he returned to Berkeley to attend the opening of an exhibition of his work that originated there and later traveled in the United States.

Since the mid-1970s, Pomodoro has continued to gain renown for his unique engagement with fundamental geometric shapes, notably the column, cube, pyramid, sphere, and disc. His massive architectonic forms suggest a continual process of self-destruction and regeneration. His work has been the subject of numerous exhibitions at major museums, including Musée d’Art Moderne de la Ville in Paris (1976), University Art Museum at University of California in Berkeley (1981), Columbus Museum of Art (1984), Hakone Open Air Museum in Kanagawa (1994), Centre of Arts in Cairo (1997), and Palazzo Magnani in Reggio Emilia (2005). In 1988 Pomodoro was invited to create a one-room installation for the Venice Biennale. He is perhaps best known for his outdoor public installations and their dramatic alteration of familiar vistas, including the Urbino Cemetery (1975), Amalienborg Square in Copenhagen (1982–83), Belvedere Fortress in Florence (1984), Cortile della Pigna in Vatican City (1989–90), United Nations Plaza in New York (1996) and Palais-Royal in Paris (2002).

His work is held in the Guggenheim museum, New York, the Vatican Museums, Trinity College, Dublin, the United Nations Headquarters and Mt. Sinai Hospital in New York, the Hirshhorn Museum and Sculpture Garden in Washington, D.C., Christian Theological Seminary in Indianapolis, the de Young Museum in San Francisco, Tehran Museum of Contemporary Art, American Republic Insurance Company in Des Moines, Iowa, the Columbus Museum of Art in Columbus, Ohio, the University of California, Berkeley, the Virginia Museum of Fine Arts in Richmond, Virginia, and the Tel Aviv University, Israel amongst others.

In 1999 he founded Fondazione Arnaldo Pomodoro in Milan. Originally conceived as a centre to document and archive the work of the artist, it opened an exhibition space in 2005, hosting exhibitions of prominent artists such as Jannis Kounellis, Lucio Fontana and Robert Rauschenberg.

Pomodoro lives and works in Milan.