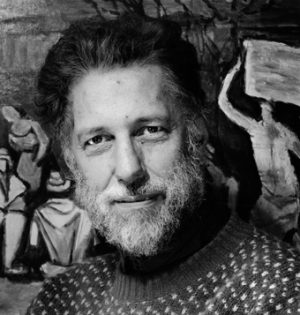 Julian Trevelyan was an English artist, a principal member of the English Surrealist movement, who exhibited at the International Surrealist Exhibition held at the New Burlington Galleries in London. Educated at Bedales School and Trinity College, Cambridge, Trevelyan moved to Paris to become an artist and enrolled at Atelier Dix-Sept, Stanley William Hayter's engraving school, where he learned about etching. He worked alongside many well-known artists including Max Ernst, Oskar Kokoschka, Joan Miró and Pablo Picasso.

In 1935, Trevelyan bought Durham Wharf, beside the River Thames in Hammersmith, London. This became his home and studio for the rest of his life and was a source of artistic inspiration to him. He married the painter Mary Fedden in 1951, and taught history of art and etching at the Chelsea School of Art. During 1955–63, he was Tutor of Engraving at the Royal College of Art, rising to Head of the Etching Department where he influenced many younger printmakers, including David Hockney and Norman Ackroyd. In September 1987 he was appointed a Royal Academician.