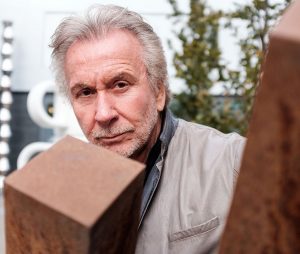 First gaining recognition in the 1960s, Bernar Venet's sculpture began to be noted widely in 1979, when he began a series of Arc sculptures, and created the first of his Indeterminate Lines for which he is now internationally recognised. His work has been exhibited extensively since, with solo shows in European museums, in the United States, South America and Asia, including the Kassel Documenta in 1977, and the Biennales of Paris, Venice and São Paulo. He is one of the most internationally sited French artists in history with 30 public sculpture exhibitions and monumental works permanently installed in cities including Auckland, Austin, Beijing, Berlin, Cologne, Denver, Geneva, Neu-Ulm, Nice, Paris, San Francisco, Seoul, Tokyo, and Toulouse. Venet has been the recipient of many awards including the Grand Prix des Arts de la Ville de Paris and Chevalier de la Légion d'Honneur, France's highest decoration. In February 2016, the International Sculpture Center will award Venet the 2016 Lifetime Achievement Award for his exemplary contributions to the field of sculpture.